Karachi’s Royal Park building to be demolished in a month

The 8-storey residency has been located on the Main Rashid Minhas Road, adjacent to Aladdin Amusement Park. 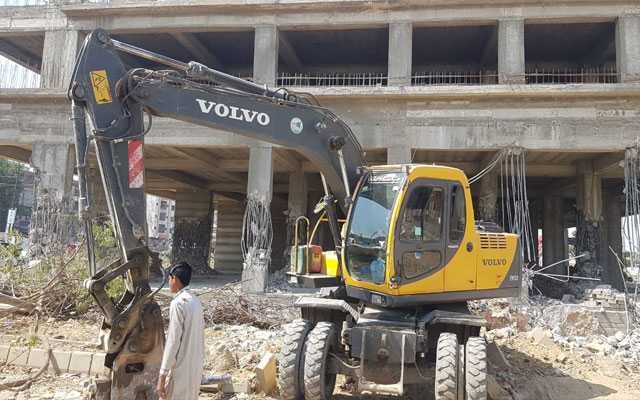 The Karachi Metropolitan Corporation (KMC) has continued the razing of the Royal Park Residency on Tuesday.

The 8-storey residency is located at the Main Rashid Minhas Road, adjacent to Aladdin Amusement Park.

The demolition has begun after the order of three-member bench of Supreme Court headed by Chief Justice Gulzar Ahmed. The CJ in an interim order declaring the building as illegal directed the commissioner of Karachi to demolish it.

On February 25, KMC razed the two-storey of the under-construction building. The first phase of the demolition was completed on Monday as said by Jamal Qureshi, the private contractor who was hired to do the job.

“The complete demolition will take about one month,” he said.

The contractor shared that the KMC has decided to demolish the structure manually to avoid an unfortunate incident as the building is located on one of Karachi’s busiest roads.

In 2014, the construction of the project started on a two-acre amenity plot which was sold to the building owner by the Sindh Board of Revenue after it was declared a commercial land. The court, however, couldn’t find any valid document to verify that the land was allotted to the owner in a legal manner.

“There are a total of 417 flats in the building. Each of them costs around Rs8. 7 million”, said the contractor.

Billions of rupees have been collected by the builder Riaz Memon at the time of the booking from the allottees in 2014.