International community must intervene to stop Indian atrocities in Kashmir. 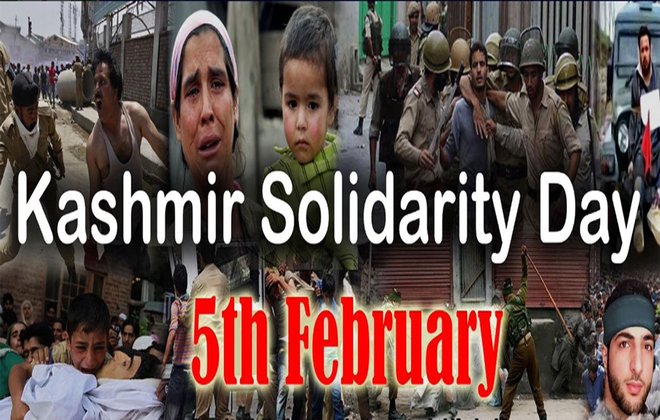 Kashmir Solidarity Day is being observed today to show Pakistan’s support and unity with the people of Indian Occupied Kashmir, their ongoing freedom struggle and to pay homage to Kashmiri martyrs who lost their lives fighting for Kashmir’s freedom.

The people of Indian occupied Kashmir have been facing the worst kind of Indian state terrorism for 71 years. Unfortunately, the international community has been unsuccessful to fulfill its obligations towards resolving the Kashmir dispute in accordance with the with the aspirations of Kashmiris.

President Dr. Arif Alvi has urged India to stop its ongoing atrocities in occupied Kashmir and allow the international observers to investigate the human rights violations in Occupied Kashmir.

The issue of Kashmir is a crisis of humanity and human rights violation that the world needs to recognize. The atrocities in Indian Occupied Kashmir must stop.

See what messages are being shared on social media today.

5th February is the day of “Renewing commitment with Kashmiri brethren”. Pakistan and people of Indian Occupied Kashmir own the natural bond with each other. #KashmirSolidarityDay #KashmirMatters #IAmKashmir pic.twitter.com/jie7M0Fjw4

#KashmirSolidarityDay
Protestors in #Rome take to streets in show of solidarity with the #Kashmiris living under Indian occupation. They highlighted the atrocities and human rights violations being carried out by the Indian forces in occupied J&K#KashmirBleeds @ohchr @amnesty pic.twitter.com/YBZe2yyWTC

In Indian occupied Jammu & Kashmir, humanity is bleeding, No doctrine of state security or sovereignty can justify such heinous acts of violence. Pakistan has and will continue to stand by the people of Kashmir. You are not alone in your just struggle for self determination.

Westminster on #KashmirSolidarityDay: Proud to recall how Benazir Bhutto championed the Kashmir cause. Today all parties do the same. No military solution to this conflict and talks between nuclear India and Pakistan must be sustained and inclusive of the aspirations of Kashmiris pic.twitter.com/2M66h9wxL6

As Pakistan observes #KashmirSolidarityDay people of Jammu & Kashmir express their gratitude to the state and its people for their vigorous and unwavering support to our democratic struggle for right to self determination.Want to share that the backlash of grave human rights…

#KashmirSolidarityDay We stand with the people of Kashmir and their brave fight against Indian Occupation in the face of brutal repression and killings by Indian security forces. https://t.co/Si7oOmHtvj

Salute to the fearless people of kashmir who despite facing inhuman atrocities have not giving up their struggle for their right of self determination. Pakistan stands with the just struggle of people of kashmir

“Our lives begin to end the day we become silent about things that matter”-MLKJr
The world needs to know #Kashmir cause is real & we are to persist,the oppressor must be hauled into court now!The freedom of each Pakistani is not complete till Kashmiris achieve it.#KashmirMatters pic.twitter.com/0bzItWKgRB

1/2 World needs to come forward to play its due role in seeking an end to the brutalities, violation of human rights and the reign of terror unleashed by Indian forces in Kashmir. Enough is enough – it must be stopped now. #KashmirSolidarityDay

2/2 On #KashmirSolidarityDay We reiterate our unwavering political, moral and diplomatic support to the people of Kashmir in their struggle for the realisation of the inalienable right to self-determination in accordance with the UN resolutions.

On this #KashmirDay, we re-affirm our commitment to the just cause of liberation of the Kashmiri people from Indian occupation and tyranny.
The struggle for self-determination and freedom lives on and will never die

#KashmirSolidarityDay
Pakistanis and all freedom loving people of the world….let's make it the top global trend and humiliate the Indian Zionists… https://t.co/EKn3AEPfeL

#KashmirMatters. Kashmir's long walk to freedom has been longer than most, but here is looking to the day that the sun will shine brighter for every Kashmiri. Even if much of the world has forgotten about it, Pakistan will not. That is why#KashmirSolidarityDay is important. pic.twitter.com/c9Emio0fGP

On #KashmirSolidarityDay let’s all make a prayer for our brothers and sisters in Kashmir. 🙏🏼

I’m in Azad Kashmir for the #QeATrophy and I’m in awe of this place. It’s rightly called heaven on earth. On this #KashmirSolidarityDay , I pray for my brothers and sisters. We stand with you.

We Pakistanis 🇵🇰 salute the perseverance of our valiant kashmiri brothers and sisters.💕

This is what world's so called biggest democracy is doing in #Kashmir#KashmirSolidarityDay pic.twitter.com/nb1sWI5ukT

tweet
Share on FacebookShare on TwitterShare on PinterestShare on Reddit
Saman SiddiquiFebruary 5, 2019
the authorSaman Siddiqui
Saman Siddiqui, A freelance journalist with a Master’s Degree in Mass Communication and MS in Peace and Conflict Studies. Associated with the media industry since 2006. Experience in various capacities including Program Host, Researcher, News Producer, Documentary Making, Voice Over, Content Writing Copy Editing, and Blogging, and currently associated with OyeYeah since 2018, working as an Editor.
All posts bySaman Siddiqui