Khawaja Asif was presented before an accountability court in assets beyond income case on Friday. 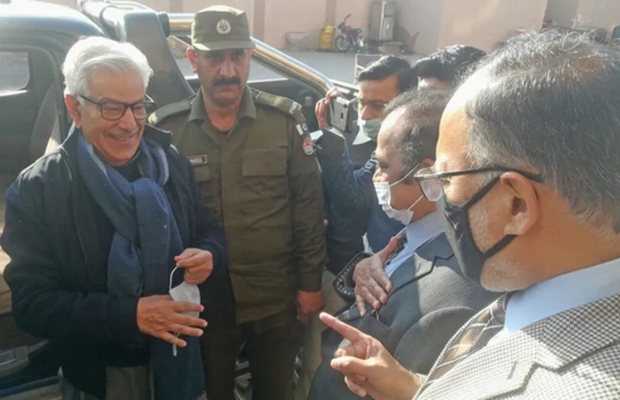 Khawaja Asif, PML-N’s Senior leader has been sent to jail on a 14-day judicial remand.

Khawaja Asif was presented before an accountability court in assets beyond income case.

The development comes on Friday when the accountability court in Lahore rejected the National Accountability Bureau (NAB) plea seeking extension in Khawaja Asif’s physical remand and sent the PML-N leader to jail on 14-day judicial remand.

According to the NAB prosecutor, Khawaja Asif said that the salary and income of the restaurant are 136 million.

“Millions were deposited in Khawaja Asif’s personal accounts. Khawaja Asif has also set up a restaurant abroad,” he added.

The NAB prosecutor appeared before the court stating that a man namely Rana Abdul Waheed deposited Rs 30 million in Khawaja Asif’s account and said in his statement that he had received the amount from the PML-N leader.

The NAB had requested the court to extend Khawaja Asif’s physical remand for fifteen days.

Judge Jawadul Hassan, who conducted a hearing on the petition. told Khawaja Asif to reveal everything to the anti-graft body.

Khawaja Asif responded that he has already shared all details with the anti-corruption watchdog and clarified that he did not give money to any person.

Khawaja Asif was arrested by the NAB on December 29, 2020, from outside the house of PML-N leader Ahsan Iqbal in Islamabad.