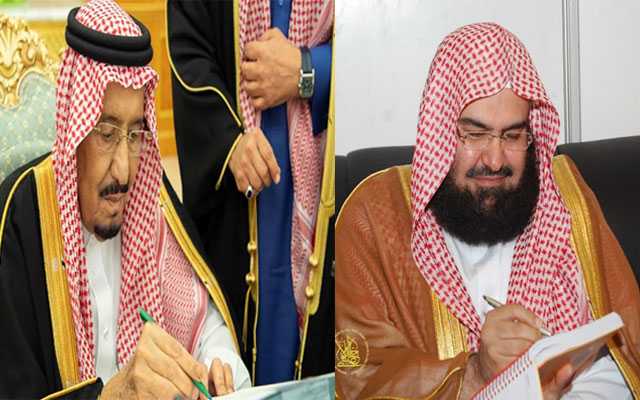 Custodian of the Two Holy Mosques King Salman Bin Abdulaziz Al Saud issued a royal decree extending the service Sheikh Abdul Rahman Al-Sudais (PhD), as the director of the General Presidency for Affairs of the Grand Mosque and the Prophet’s Mosque for another four years.

Al-Sudais said in his statement, “The Presidency is receiving great attention from the rulers. This concern helped the Presidency to perform its duty with ease and
competence.”

He further stated “This is in line with the guidance and careful follow-up of the wise leadership in serving the Two Holy Mosques and those visiting them in a way fulfilling the aspirations of the Kingdom’s leadership, providing the Presidency and its staff members with all services that is needed to perform their duties fully.”

“Best proof is that The Two Holy Mosques in the previous years had huge
expanding operations, regulation of management, guidance,
security, crowd control and most use of technology.” he added.

He also adored the Saudi government and said “The services are supervised by many government, private and charity sectors.This attention started from the founder of this great country, King Abdulaziz Bin Abdul Rahman Al Saud, and have been continued after him by his sons, rulers of this country, up to the great era of the Custodian of the Two Holy Mosques King Salman Bin Abdulaziz Al Saud and Crown Prince Muhammad Bin Salman Al Saud.”

In his concluding remarks, Al-Sudais asked Allah for success and His help him in serving Islam and the land of Saudi Arabia, and to fulfill the aspirations of the
Kingdom’s leadership.