Karachi: Korangi Causeway closed for traffic again due to flooding

PMD has once again forecasted heavy showers and thunderstorms over the next 24 hours in Karachi. 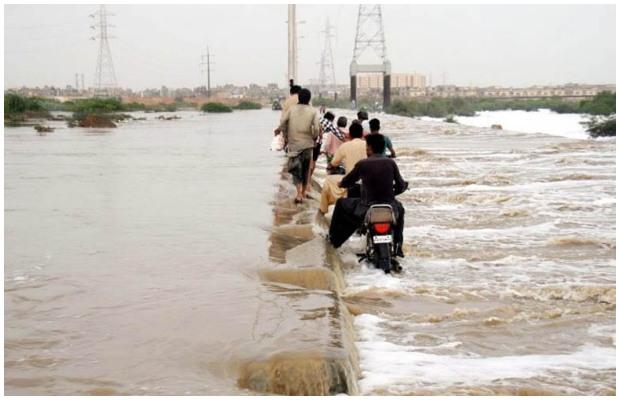 Karachi’s Korangi Causeway has been closed for traffic again due to the flooding of Malir Nadi.

The Monsoon rains continued in the port city due to which the Korangi Causeway has been flooded several times.

Due to flooding in the Malir river, the road of the causeway is in a dilapidated condition.

On Thursday, the causeway has again been closed to traffic.

The causeway has been blocked by the traffic police.

While the traffic is being diverted to an alternative route.

Pakistan Meteorological Department (PMD) has once again forecasted heavy showers and thunderstorms over the next 24 hours in Karachi.

As per the PMD forecast, the city’s weather is likely to remain cloudy throughout the day with intermittent rain.

On Thursday the lowest temperature was recorded at 26.5 degrees Celsius in the last 24 hours while the mercury may shoot up to 29-30 degrees Celsius over the course of today.

The Sindh government announced a two-day closure of educational institutes on Aud 24 and 25,  (Wednesday-Thursday) keeping in view the forecast of heavy rains by PMD.