a VR machine has been inagurated to view the Black Stone in 3D format and can also be manipulated. 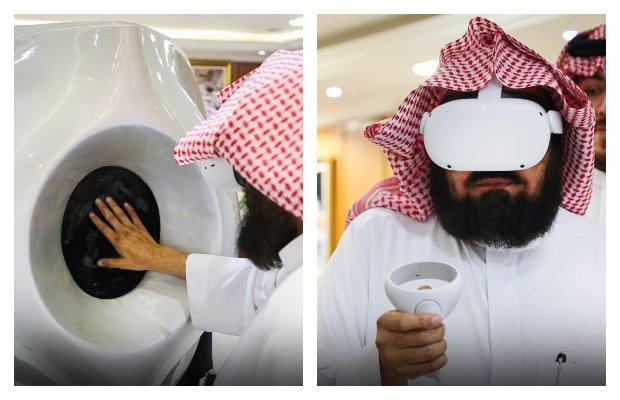 However, the inauguration of the latest VR project has sparked a debate on social media.

On Dec 15, The Chief Administrator of Masjid-e-Haram and Masjid-e-Nabawi, Dr. Abdul Rahman Al-Sudais inaugurated a VR in which Black Stone can be viewed in 3D format and can also be manipulated.

Archaeological and museum organizers in Saudi Arabia have joined forces with the Hajj and Umrah sub-division for research in Umm al-Qura, established by King Salman bin Abdulaziz.

On the occasion of the inauguration, Dr. Abdul Rahman Al-Sudais said that there are treasures of wonders in our country. In the same way, we need to digitize all the wonders and places and present them to the world and spread our message.

“We desperately need to create a virtual environment in which the senses can be used to the maximum, and vision as well as hearing, touch, and even the sense of smell can be imitated. In order to send a message to the world about how the government of the Custodian of the Two Holy Mosques is doing all this with full dedication and sincerity,” he said.

The initiative has sparked a debate on social media following comments in favour and in opposition.

Comments in Opposition:
A Twitter user wrote: Muhammad Rasoolullah has said that as long as Hajj continues, the Hour will not come. While the religion of the new world order is being imposed on you, it is a lie.

A person named Bahatha An-Haq writes: My question to the scholars is whether Hajj can be performed in such a virtual way and whether there is any scope for it in the near future.
A person named Ziyad al-Rabi commented: If the organizers of the Haram can make a virtual black stone, then consider the fatwa of virtual Hajj. The problem is just the announcement at the right time and nothing more.
Another person wrote: Hazrat Sadis Sahib, the Imam of Haram Mukki, has issued a way to touch the Black Stone through VR, and now it seems that we will soon be able to perform Hajj on Metaverse.

Yasir Saaduddin wrote:  Virtual Black Stone !! How long will the scholars of the ummah remain silent on this nonsense entering the religion?
Al-Hass ibn Ali Al-Kitabi shared: This innovation turned out to be the dirtiest and ugliest innovation that has played with the rites of Allah.
Comments in Support:
A person shared: My message is to the blind of the intellect who are a little overwhelmed by this news. This invention has nothing to do with your duties or worship. This is for those who can’t come here so that they can touch and feel these things through this technology and enjoy its beauty. The rest is Hajj, Umrah, visiting the Ka’bah, touching it, and performing acts of worship.

A social media user named Baeed-ul-Ham wrote: The purpose of this invention is educational and tourism so that the Muslims who have not been able to come here can see the shape and form of these places. This is not a substitute for Hajj Umrah.

What are your thoughts on this development? Share with us in the comments section below.

tweet
Share on FacebookShare on TwitterShare on PinterestShare on Reddit
Saman SiddiquiDecember 17, 2021
the authorSaman Siddiqui
Saman Siddiqui, A freelance journalist with a Master’s Degree in Mass Communication and MS in Peace and Conflict Studies. Associated with the media industry since 2006. Experience in various capacities including Program Host, Researcher, News Producer, Documentary Making, Voice Over, Content Writing Copy Editing, and Blogging, and currently associated with OyeYeah since 2018, working as an Editor.
All posts bySaman Siddiqui