Brother of the deceased Priyantha Kumara has requested not to share videos of the incident on social media. 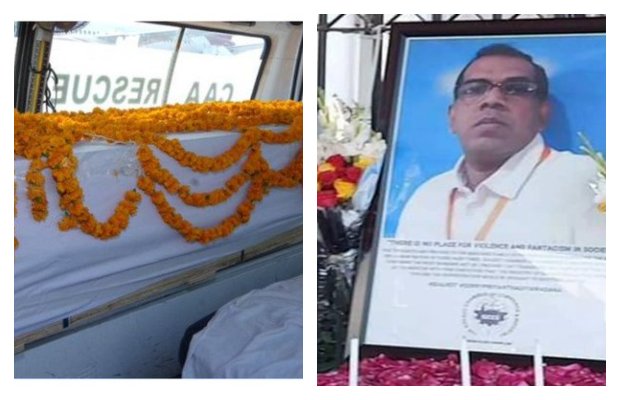 The last remains of the slain Sri Lankan factory manager were flown to Colombo on Monday.

Sri Lankan factory manager Priyantha Kumara was lynched to death by a mob in Sialkot on Dec 3.

Pakistan High Commission received the body at Colombo Airport and handed it over to the Sri Lankan authorities.

Priyantha Kumara’s body was flown in a Sri Lankan plane from Lahore in the afternoon.

The flight arrived in Colombo at 5 pm local time.

“[The] High Commission appreciate the unstinted assistance by the Gov of Pakistan and Provincial Gov of Panjab in making this transfer possible in such a short time period,” the Sri Lankan High Commission to Pakistan tweeted.

On the other hand, the brother of the deceased Priyantha Kumara has requested not to share videos of the incident on social media.

According to the Lincoln News Agency, Priyantha’s brother strongly requested that she stop sharing videos and photos of violence and abuse against her brother.

The victim’s brother said in a statement that videos of his brother’s murder on social media left his family in shock, especially Priyantha’s wife and their two children.