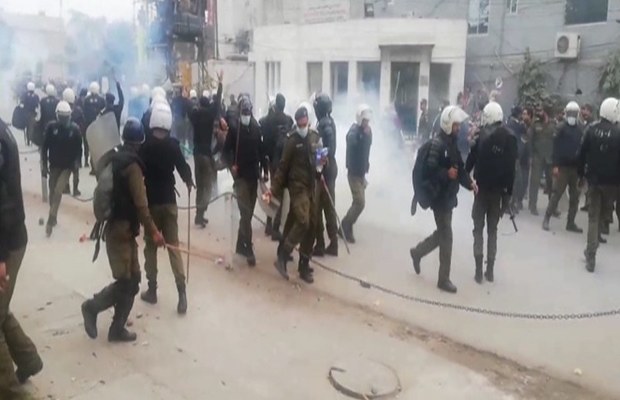 Punjab Chief Minister Usman Buzdar on Wednesday has taken the notice of an attack by lawyers on the Punjab Institute of Cardiology (PIC) in Lahore.

A large number of lawyers gathered outside PIC on Wednesday. However, the protest turned violent as the lawyers initially closed off entry and exit points to the hospital.

The protesters have caused damaged to equipment inside PIC and broke windows of the hospital as well as cars parked outside.

As being reported the lawyers attacked the PIC after a video went viral on social media. In the alleged viral videos which a doctor is seen narrating an encounter with some lawyers in front of a group.

According to the doctor, a group of lawyers had gone to the inspector general and told him to charge “two doctors” under Section 7 of ATA. He narrated that the IG had refused while the lawyers had urged him to press charges, saying “they could save face” that way.

The protest is currently underway, halting the medical treatment at the hospital.

Punjab Minister for Information Fayyaz ul Hasan Chohan who arrived at the hospital was also attacked by the lawyers.

They tried to kidnap me,” Chohan said in a statement. “I came to   deal with the situation and they started abusing me.”

He also added that a first information report (FIR) will be  registered against those responsible.

Prime Minister Imran Khan has taken notice of the incident and ordered Punjab chief secretary and Inspector General Punjab to submit a report of the incident.

The chief minister, ordering an investigation into the attack, summoned a report from the Lahore Capital City Police Officer (CCPO) and provincial secretary of specialized health and medical education.

tweet
Share on FacebookShare on TwitterShare on PinterestShare on Reddit
Saman SiddiquiDecember 11, 2019
the authorSaman Siddiqui
Saman Siddiqui, A freelance journalist with a Master’s Degree in Mass Communication and MS in Peace and Conflict Studies. Associated with the media industry since 2006. Experience in various capacities including Program Host, Researcher, News Producer, Documentary Making, Voice Over, Content Writing Copy Editing, and Blogging, and currently associated with OyeYeah since 2018, working as an Editor.
All posts bySaman Siddiqui