The Amazon has been on fire and burning for the last 16 days running, with literally NO media coverage whatsoever! Why?". 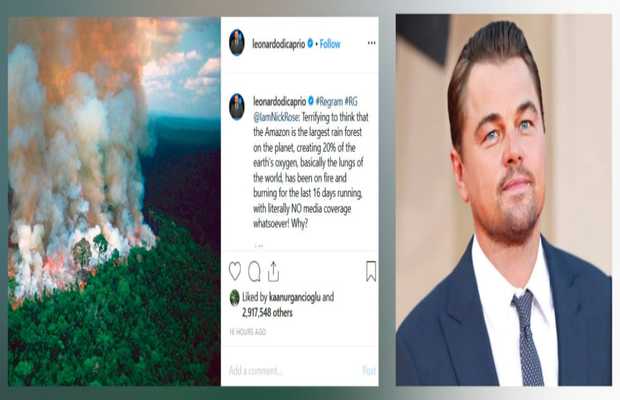 Hollywood superstar Leonardo DiCaprio, who is also an environmentalist has raised a question over the lack of media coverage of the ongoing fire at the Amazon rainforest.

Once Upon a Time in Hollywood star took to social media to share his concern.

The Amazon rainforest is on fire; It has been burning for 3 weeks and we have just found out about it!

DiCaprio posted a photo of the Amazon rainforest fire, on his Instagram with the caption saying: “Terrifying to think that the Amazon is the largest rain forest on the planet, creating 20% of the earth’s oxygen, basically the lungs of the world, has been on fire and burning for the last 16 days running, with literally NO media coverage whatsoever! Why?”.

As being reported, even though the Amazon rainforest has a wet and humid climate, the months of July and August normally witness a dry season, and this is also the time when the forest fires mostly occur. Sometimes, the forest fires are manmade, because of farming and ranching activities.

So far this year, almost 73,000 fires have been detected by Brazil’s space research center INPE. That marks an 83% increase from 2018 and the highest number on record since 2013.

According to INPE – Instituto Nacional de Pesquisas Espaciais (National Institute for Space Research), more than 1½ soccer fields of Amazon rain-forest are being destroyed every minute of every day.

Leonardo Dicaprio is an active environmentalist who keeps raising his voice for the issues related to the world’s environment.