Macron takes a U-Turn, seeks to calm tensions with Muslims

French President Emmanuel Macron has said that he understands the ‘sentiments’ being expressed by the Muslim world over cartoons of Prophet Muhammad. 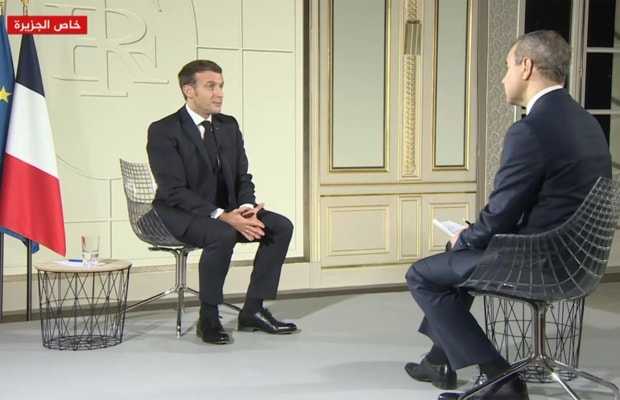 It seems like the global backlash by the Muslims towards France and its products have taken a toll on the French President and in an apparent bid to reach out to Muslims, leading Macron to take a U-Turn.

The French President has given an exclusive  interview to Qatar-based TV channel Al Jazeera, set out his vision seeking to strike a softer tone.

This interview with Al Jazeera TV, is to be telecast on Sunday. The exclusive talk comes amid heightened tensions between the French government and the Muslim world over the blasphemous cartoons published in France, which Muslims consider disrespectful towards their religion.

French President Emmanuel Macron has said that he understands the ‘sentiments’ being expressed by the Muslim world over the cartoons of Prophet.

“I can understand that people could be shocked by the caricatures, but I will never accept that violence can be justified,” he said.

“I understand the feelings that this arouses, I respect them. But I want you to understand the role that I have. My role is to calm things down, as I am doing here, but at the same time it is to protect these rights’, he said. “I will always defend in my country the freedom to speak, to write, to think, to draw.”

The french president lashed out at  political leaders for “distortions” over cartoons of the Prophet (PBUH), saying too often people were led to believe that they were a creation of the French state.

He added that “a confusion that has been fed by many media, and sometimes political and religious leaders,  which is to say that these caricatures are in a way the project or the creation of the French government or the president”.

But there was no mention of why the French government allowed the display of those cartoons over the government building earlier this month!

He also condemned the calls for a boycott of French goods, backed in particular by Turkish President Recep Tayyip Erdogan and taken up by some retailers in Muslim countries, as “unworthy” and “unacceptable”.

He added that the boycott French goods campaign was created by some private groups “who relied on lies… sometimes from other leaders” about the caricatures.

tweet
Share on FacebookShare on TwitterShare on PinterestShare on Reddit
Saman SiddiquiNovember 1, 2020
the authorSaman Siddiqui
Saman Siddiqui, A freelance journalist with a Master’s Degree in Mass Communication and MS in Peace and Conflict Studies. Associated with the media industry since 2006. Experience in various capacities including Program Host, Researcher, News Producer, Documentary Making, Voice Over, Content Writing Copy Editing, and Blogging, and currently associated with OyeYeah since 2018, working as an Editor.
All posts bySaman Siddiqui