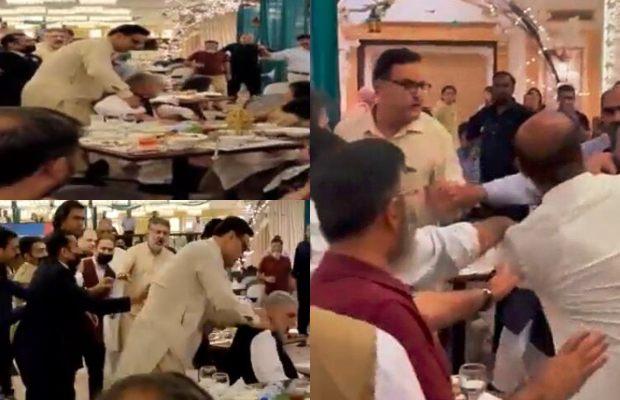 A scuffle broke out at Marriot hotel Islamabad on Tuesday evening apparently after Aftaar.

The elderly man apparently a PTI supporter abused the politicians and accused them of “selling vote” and called Noor Alam Khan a ‘turncoat’ which sparked the heated exchange between them.

The video of the incident has gone viral on social media, showing, Khan and Khokhar thrashing the elderly citizen after he threw a bottle at the dissident PTI lawmaker Noor Alam Khan.

The incident at Marriott Islamabad is condemnable! It is not about Naya or Porana Pakistan.

Every citizen must respect the lines of public & private, as well as professional and personal.

A citizen name-calling politicians in their private sittings is as wrong as a politician physically hurting them also.

Here is how Netizens reacted to the incident.

Mustafa Nawaz Khokhar punches an elderly man to the ground for free speech while Noor alam Khan jumps at him from behind, as is his nature.

Just in from Marriott Islamabad, an elderly man chanted slogans against Turncoats and he was beaten ferociously by PPP Sentor Mustafa Khokhar, Nadeem Afzal Chan and Noor Alam Khan.
pic.twitter.com/CrEzYGof0O

On the other hand, reports emerge that MNA Noor Alam Khan following the incident has submitted an application to the Secretariat Police Station in Islamabad, seeking registration of a case against the unidentified citizen.

Khan in the submitted application has maintained that the elderly man started swearing at him while he was having Iftar dinner with the PPP leaders.

After being told to stop using offensive words, the alleged PTI supporter attacked the lawmaker, said Alam while demanding the police take legal action against the accused.

“The man did not stop and assaulted me and Mustafa Nawaz Khokhar with intent to kill, at which point we tried to stop him in our defense,” he claimed.

Noor Alam complained that PTI workers have misbehaved with him in the past as well, of which there is a video record available.

He has requested the police officials to take action against “such miscreants”.

tweet
Share on FacebookShare on TwitterShare on PinterestShare on Reddit
Saman SiddiquiApril 13, 2022
the authorSaman Siddiqui
Saman Siddiqui, A freelance journalist with a Master’s Degree in Mass Communication and MS in Peace and Conflict Studies. Associated with the media industry since 2006. Experience in various capacities including Program Host, Researcher, News Producer, Documentary Making, Voice Over, Content Writing Copy Editing, and Blogging, and currently associated with OyeYeah since 2018, working as an Editor.
All posts bySaman Siddiqui