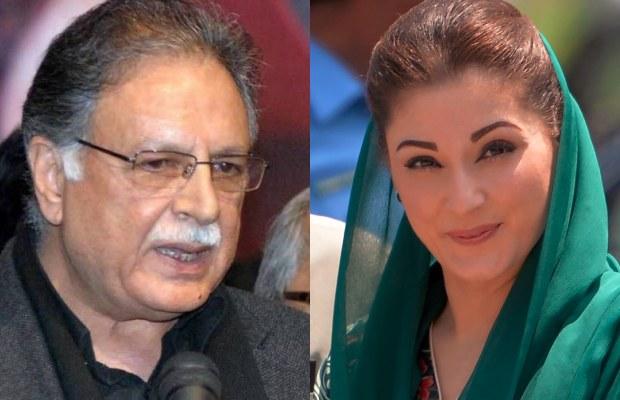 Maryam Nawaz, Parvez Rasheed alleged leaked audio emerges on Tuesday in which the two are purportedly talking about the “bias” of certain journalists.

The alleged leaked clip was initially shared by shared by ARY News and Samaa TV online on Monday, that later started to trend on social media without being verified.

PML-N leader Pervez Raheed is alleged to be talking about an apparent reference to Geo News’ well-known show Report Card.

The news talkshow features journalist Mazhar Abbas Abbas, Arshad Bhatti, Hassan Nisar as panelists on the the regular basis while Niazi has been a part of the show in the past.

In the alleged clip, Rashid can be heard saying: “They have a programme ‘Score Card’, (he refers to program Report Card)”

“You know [journalist] Hasan Nisar is included in the programme who abuses us (PML-N) a lot,” he allegedly adds.

While, in the same alleled clip Maryam Nawaz can be heard saying  that anchorperson Irshad Bhatti also appears on the show, to which Rashid responds that Bhatti too “talks very vulgarly”.

The two PML-N leaders allegedly talk about veteran journalist Mazhar Abbas who, Rashid claims, is “tilted against us and also spins [things] to make fun of us”.

The alleged conversation carries on as Pervez Rasheed says, “Nobody there can be called our spokesperson. [Analyst Hafeezullah Niazi] did not give our point of view but the way they abuse us … he would treat Imran Khan the same way. They have removed him and discontinued his column.”

“The way they [Nisar or Bhatti] abuse us, he used to do the same to Imran Khan. But now they have removed him from the show and even stopped his column.”

To this, Maryam Nawaz says that she would ask the person why Niazi has been removed from the program.

“I would like to request you to talk to this person and also to Mir Shakil,” says Rashid.

Maryam Nawaz responds saying says she would first ask Niazi the reason for his removal from the panel and then take up the matter with Jang Group owner Mir Shakeelur Rehman.

“First, let me get the inside story from this person,” says Maryam.

“If they do such an imbalanced program … There was one check on Imran Khan and they have removed it but the dogs barking at us have been added [to the show],” says Parvez Rasheed.

“It will become an imbalanced programme. If there was a check on Imran Khan, you have ended it and [imposed] barking dogs on us,” Parvez Rasheed can be heard saying.

“Indeed, this is bias,” Maryam responds.

Furthermore atthe end of the leaked audioclip, Maryam Nawaz can be heard passing instructions that a pair of baskets that former prime minister Nawaz Sharif brought from Azerbaijan should be sent to journalists Nusrat Javeed and Rana Jawad.

On the other hand journalist Nusrat Javeed has responded to the part of the alleged leaked audio, where Maryam Nawaz mentions his name for giving him a gift of fruit basket.

@arsched my dear, it was a basket of fruit and this came only once. In comparison to this @JahangirKTareen had regularly been sending crates of Mangoes to me. Aftab Sherpao Sahib had sent me GURR from his farm only two days ago; expecting the same from Asfandyar Wali as well.

While Mazhar Abbas has also tweeted about the audio leak saying that he is proud of his journalism and critical view.

“Thank you @SenPervaizRd and @MaryamNSharif, I am proud of my journalism and stand by my comments critical views. One should agree to disagree but ‘zaban apni apni’. Kuda ka sukhar ha maa baap nay achi tarbeat ke ha. Just for the record Pervaz sb its Report Card not Score Card,” senior journalist tweeted.

Thank you @SenPervaizRd and @MaryamNSharif I am proud of my journalism and stand by my comments critical views. One should agree to disagree but 'zaban apni apni'. Kuda ka sukhar ha maa baap nay achi tarbeat ke ha. Just for the record Pervaz sb its Report Card not Score Card.