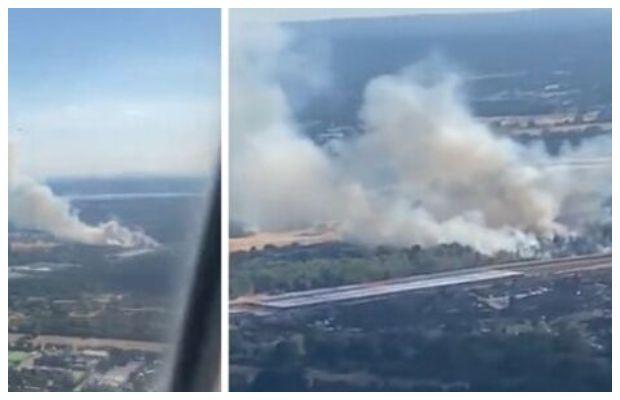 Massive fire erupts in Feltham after a ‘loud explosion’ was heard near Heathrow airport, on Sunday evening.

According to the British media, dozens of residents were evacuated after around 70 firefighters were scrambled to a huge blaze in the west London site.

As reported, the fire erupted less than two miles from Heathrow airport and could be clearly seen from planes coming into land, involving trees, hedgerows, shrubs, and decking at the rear of a number of properties on Hereford Road in Feltham.

So far there have been no official reports of casualties.

Metropolitan Police said its officers have been assisting LFB at the scene and have advised people to “avoid the area”.

The main road, Harlington Road East, has also been closed.

There hasn’t been any official confirmation, however, images and video clips related to the incident are circulating on social media.

Coming in to land at Heathrow just before 5pm today. The scorched fields. The fire! pic.twitter.com/ndHwZrz7lF

#fire in #feltham what the hell is going on pic.twitter.com/t5kJiEGK1U

Very alarming reports coming in of a massive #explosion and #fire at #Heathrowairport. Thoughts and prayers with everyone involved…https://t.co/m19XwxCJc1

tweet
Share on FacebookShare on TwitterShare on PinterestShare on Reddit
Saman SiddiquiAugust 8, 2022
the authorSaman Siddiqui
Saman Siddiqui, A freelance journalist with a Master’s Degree in Mass Communication and MS in Peace and Conflict Studies. Associated with the media industry since 2006. Experience in various capacities including Program Host, Researcher, News Producer, Documentary Making, Voice Over, Content Writing Copy Editing, and Blogging, and currently associated with OyeYeah since 2018, working as an Editor.
All posts bySaman Siddiqui