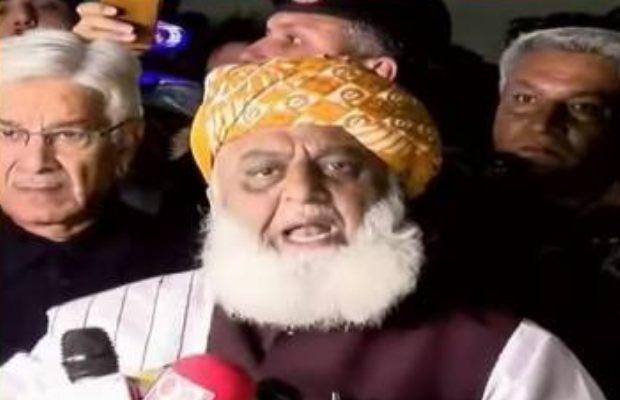 He made the announcement during a media talk as he reached the parliament lounges to court his arrest after police manhandled lawmakers resisting their bid to take out the members of Ansar ul Islam, a JUI wing.

Maulana Fazlur Rehman said that the Ansar ul Islam volunteers were deployed at the parliament lounges to ensure the security of the parliamentarians during the no-confidence motion proceedings.

Fazl said he had no confidence in the police which were under government control.

Islamabad police conducted an operation inside the Parliament Lodges upon the command of the director-general of police (operations) to clear the premises from Ansar-ul-Islam workers— a uniformed volunteer force of the JUI.

Protesting against the arrest of its two lawmakers and members from parliament lodges, JUI-F members have been organizing protests, blocking the main roads in Sindh’s different parts.

JUI-F workers block roads in various cities of Sindh, including  Sukkur and Jacobabad, on the call of their chief Fazlur Rehman.

As being reported, the Islamabad police arrested more than a dozen Ansar-ul-Islam workers. Police took 30 minutes to clear the area of Ansar ul Islam as they made their way towards the lodge of Ansar-ul-Islam MNA — Salahuddin Ayubi — which was situated on the fourth floor of the building.

Salahuddin Ayubi, another JUI-F MNA who was arrested by Islamabad police from parliament lodges a few hours ago. pic.twitter.com/R5s1w8QbOm

According to the government source, 50 persons entered the parliament lounges on just 10 entry passes.

Interior Minister Sheikh Rasheed said in a statement that police tried to resolve the matter through talks but they did not obey the orders. And the police action was taken after a five-hour dialogue.