"I am not being dramatic. I have spent the last four years stressed because of the Sindh government and the chief minister", he said 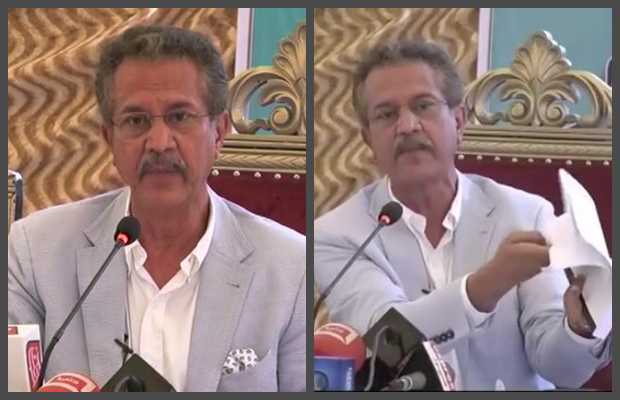 Mayor Karachi Waseem Akhtar, in his farewell speech on Monday, slammed Sindh Government for non-cooperation during his entire tenure.

While speaking to the media at the KMC head office, Mayor Karachi in an effort of recounting his performance over the past four years, said that he had written “thousands” of letters to the Sindh government as well as the prime minister and the president.

“Who will take these? Not a single reply was given,” he said, tossing the papers and getting teary-eyed.

“Karachi feeds you and your children. You have set up shop here after coming from different districts. This is Paris for you. I have seen the houses you have purchased in Defence and Clifton.

“Why are you inflicting torture on the people of the city? I have written thousands of letters. I am not joking, the Supreme Court should take notice, the prime minister should do something for this city.

“I am not being dramatic. I have spent the last four years stressed because of the Sindh government and the chief minister.

“They don’t want development, not just in Karachi but in all of Sindh. They just want to loot the city,” he said, adding that the provincial government had “destroyed” Larkana, Sehwan, Dadu, and Mirpurkhas.

“What have they done in the past 12 years? They are nowhere to destroy this city. They are dividing it. Someone should question them.”

“Halve the population of Sindh, that is my mandate. My mandate is more than the chief minister and no one answers my letters?”

He further added that he had been working for the past four years to fix his departments but was unable to do so due to a lack of funds. “If I don’t have funds, what will I do? Bring them from home?”

He also said that in the past four years, he had not bought a car, nor let anybody else buy one. “I saved money.”

Referring to the body formed for the city’s betterment, he said, “The prime minister saw two men drowning [in the city] on TV and sent the NDMA. PM Sahab, you should come here yourself. This city is responsible for your budget. Nothing can be done by sitting over there. Come and fix the city, nothing is achieved by forming committees”.