Harry and Meghan also revealed that their second would be a girl. 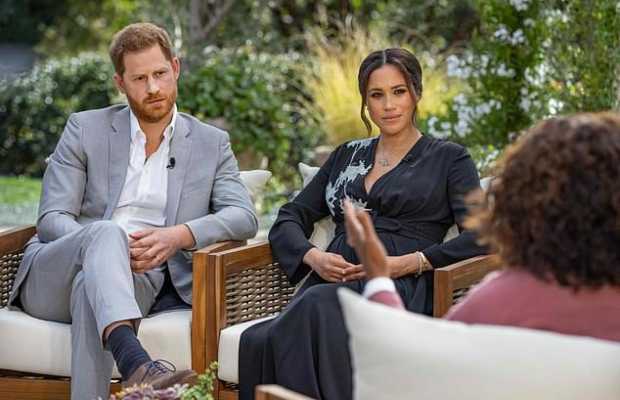 Meghan’s bombshell interview with Oprah Winfrey in which she accuses the British royal family of racism has become the talk of the town.

The Internet has been buzzing with all sorts of speculations ever since the interview airing date was announced.

It was the first-ever public comment in an interview of Meghan Markel and Prince Harry, the Duke and Duchess of Sussex after they stepped down from senior roles in the British royal family.

The TV special is being regarded as the most anticipated gig as Harry and Meghan are now allowed to speak more freely about the royal family due to their effective split from the palace.

However, that’s not the case back in the UK and British media has taken their knives out at the former Royals.

The 39-year-old, Meghan pregnant with her second child came out accusing the British Royal family of racism.

Harry and Meghan also revealed their second child would be a girl.

According to her, she had been naive before she married into the family in 2018, but that she ended up having suicidal thoughts and considering self-harm after pleading for help but getting none.

“I just didn’t want to be alive anymore. And that was a very clear and real and frightening constant thought. And I remember how he [Harry] just cradled me,” Meghan said, wiping away tears in an interview with Oprah Winfrey aired on CBS late on Sunday.

Harry said he was “terrified” by his wife’s admission.
“I had no idea what to do, I went to a very dark place as well, but I wanted to be there for her,” he added.

Meghan went on to say that her son Archie had been denied the title of prince because there were concerns within the royal family about how dark his skin might be.

“They didn’t want him to be a prince,” she said adding there had been “conversations about how dark his skin might be when he’s born.”

Harry in response to a question from Winfrey, said that he wouldn’t have left royal life if not for his wife.

He said their relationship revealed the strictures of royal life.

“I wouldn’t have been able to, because I myself was trapped,” Harry said. “I didn’t see a way out,” he added.

“I was trapped, but I didn’t know I was trapped,” Harry said, before adding, “My father and my brother, they are trapped.”

“There is a lot to work through there,” Harry said about his relationship with his father.

“I feel really let down. He’s been through something similar. He knows what pain feels like. And Archie is his grandson. I will always love him, but there is a lot of hurts that have happened.”

Prince Harry also revealed that the royal family cut him off financially at the start of 2020 after announcing plans to step back from his roles.

But he was able to afford security for his family because of the money his mother, Princess Diana had left behind.

“I brought what my mom left me. And without that, we would not have been able to do this … I think she saw it coming. I certainly felt her presence throughout this whole process,” he said.

Prince Harry also said that he loves his brother Prince William “to bits,” despite frequent rumors and speculation of sibling conflict.

And at the end of the interview with Oprah, Meghan Markle said her story with Prince Harry is “greater than any fairy tale.”

Oprah: “So, your story with the prince does have a happy ending.”