Mehwish Hayaat has been invited by the Emirates Airlines to represent Pakistan at the US Open finals. 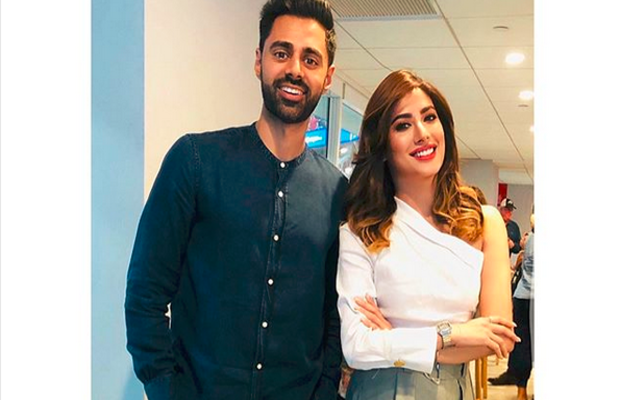 Pakistani starlet, Mehwish Hayat who is currently in the United States representing Pakistan at the US Open, has met another international celebrity.

Earlier she had posted a photo of her along Nick Jonas, whom she met at the US Open men’s semifinal and startled many all around the world.

Read More : “Guess who I ran into at the US Open Men’s Semi Finals”, Mehwish Hayat

This time again setting the internet on fire, Punjab Nahi Jaungi starrer has taken to social media sharing the news along with a photo, as she met the famous US comedian Hasan Minhaj at the US Open Men’s final.

Mehwish Hayat captioned her photo post saying, “It was such a joy to be invited by the @emirates to represent Pakistan at the @usopen Finals & to rub shoulders with global celebrities such as @hasanminhaj. Love his Netflix show & his outspoken opinions. @RafaelNadal‘s victory was the cherry on the cake ! ❤️”.

People have been wondering how come she kept running into celebs lately, the actress herself has answered to public’s curiosity.

Mehwish Hayaat has been invited by the Emirates Airlines to represent Pakistan at the US Open finals and given a chance to meet global celebrities.

Way to you girl! Keep continuing to make Pakistan proud!

tweet
Share on FacebookShare on TwitterShare on PinterestShare on Reddit
Saman SiddiquiSeptember 11, 2019
the authorSaman Siddiqui
Saman Siddiqui, A freelance journalist with a Master’s Degree in Mass Communication and MS in Peace and Conflict Studies. Associated with the media industry since 2006. Experience in various capacities including Program Host, Researcher, News Producer, Documentary Making, Voice Over, Content Writing Copy Editing, and Blogging, and currently associated with OyeYeah since 2018, working as an Editor.
All posts bySaman Siddiqui