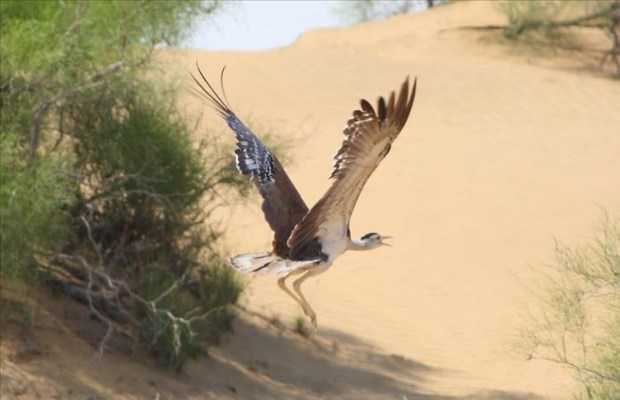 The hunting party is equipped with gears and falcons to hunt houbara bustard.

Earlier in December 2020, it was reported that the federal government has issued special permits to King of Bahrain Hamad bin Isa bin Salman Al-Khalifa and six other members of the royal family to hunt the internationally protected Houbara bustards during the hunting season 2020-21.

Furthermore, special permits were issued to Saudi Arab Crown Prince Mohammed bin Salman and two other members of the Saudi ruling family to hunt the internationally protected houbara bustards during the hunting season 2020-21.

According to sources, the Saudi royals had been allocated certain hunting areas in  Balochistan and Punjab.

The government on regular basis gives out permits for hunting the rare bird species to a number of Arab royalties, while Pakistanis are not allowed to hunt it.

Keeping in view that the houbara bustard species is threatened with global extinction. And it comes under the “vulnerable list” of (International Union for Conservation of Nature) IUCN.

tweet
Share on FacebookShare on TwitterShare on PinterestShare on Reddit
Saman SiddiquiJanuary 10, 2021
the authorSaman Siddiqui
Saman Siddiqui, A freelance journalist with a Master’s Degree in Mass Communication and MS in Peace and Conflict Studies. Associated with the media industry since 2006. Experience in various capacities including Program Host, Researcher, News Producer, Documentary Making, Voice Over, Content Writing Copy Editing, and Blogging, and currently associated with OyeYeah since 2018, working as an Editor.
All posts bySaman Siddiqui