Obama also called on Americans to vote and condemned voter suppression efforts, including the president's efforts to discourage mail-in voting. 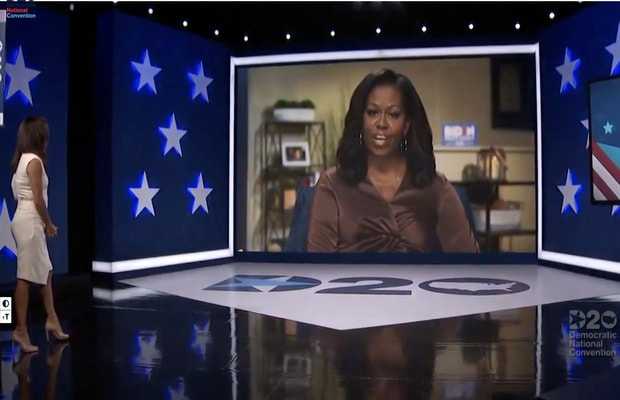 Former First Lady Michelle Obama slams Trump in a speech on the day 1 of the Democratic National Convention on Monday.

“If you take one thing from my words tonight, it is this: If you think things cannot possibly get worse, trust me they can — and they will — if we don’t make a change in this election,” she said in an 18-minute long pre-recorded speech.

She urged her fellow Americans to choose empathy over hatred and division and strongly condemned President Donald Trump’s character and politics. She maintained that Trump is modeling “that greed is good and winning is everything,” but held that most Americans “know that what’s going on in this country is just not right.”

Read More : Netflix to Release a Documentary Based on Michelle Obama Memoir Becoming

“Sadly, this is the America that is on display for the next generation — a nation that’s underperforming not simply on matters of policy, but on matters of character,” she said. “And that’s not just disappointing, it’s downright infuriating.”

“Let me be as honest and clear as I can: Donald Trump is the wrong president for our country,” she said. “He has had more than enough time to prove that he can do the job, but he is clearly in over his head. He cannot meet at this moment. He simply cannot be who we need him to be for us.”

She added, “It is what it is” — the same words which Trump recently used to refer to the Covid-19 death toll.

In her later part of speech, former first lady compared Biden’s leadership qualities of Biden with the character of Trump’s.

“I know Joe. He is a profoundly decent man guided by faith,” Obama said. “He listens. He will tell the truth and trust science. He will make smart plans and manage a good team. And he will govern as someone who’s lived life the rest of us can recognize.”

"This is not the time to withhold our votes in protest or play games with candidates who have no chance of winning. We have got to vote like we did in 2008 and 2012."

Her complete speech can be watched here:

If we want to end the chaos and division—and keep alive the possibility of progress on the issues we hold dear—we’ve got to vote for @JoeBiden and @KamalaHarris like our lives depend on it. Register today by texting VOTE to 30330. https://t.co/xPu5o0SYLJ