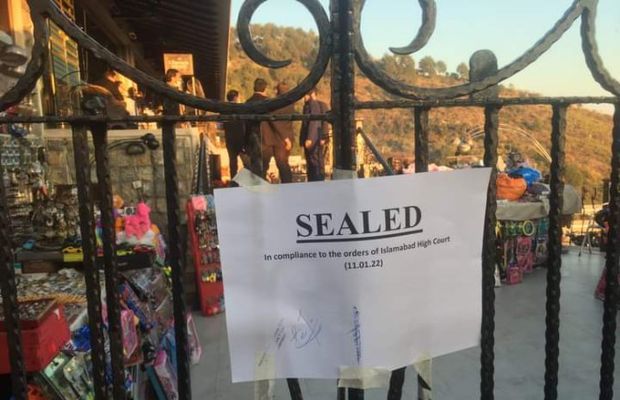 Monal Restaurant has been sealed on IHC orders on Tuesday.

As being reported, the major entry and exit routes of Monal were closed.

While the families present at the venue were given a few hours to evacuate the restaurant before sealing.

The Islamabad High Court (IHC) directed the Islamabad chief commissioner and the Capital Development Authority (CDA) on Tuesday to seal off Monal Restaurant immediately and take over the navy’s golf course.

The orders were issued by Chief Justice Athar Minallah while hearing a case of encroachment in Margall Hills National Park.

The chief justice questioned the status of the Monal, saying “How it was built, it should not have been constructed.’

“It should be sealed if the lease of Monal has lapsed,” the chief justice said.

While the authorities fulfilled the court orders, netizens flock to Twitter trending #SaveMonal on the same day.

Monal is internationally known for its scenic views. It attracts tourism and has also maintained the quality and hygiene of the food.the empty space would be in no one’s favour. Courts need to give sensible verdicts. We dont need nasla 2.0 in islamabad.@ImranKhanPTI #SaveMonal pic.twitter.com/dlooeGR9Pb

The respected courts are requested to review the decision. #SaveMonal & the livelihood of over 700 families pic.twitter.com/p9QfXNcYoZ

Islamabad High Court ordered capital authorities to seal Monal Restaurant as built on encroached land, monal have a lease of 30 years & was constructed in 2005 under the Provision 21 (3) of MHNP ordinance then how can it be illegal 😬#SaveMonal pic.twitter.com/UNOls7lDRD

#SaveMonal Monal always promote tourism in Pakistan, it is considered an iconic beauty of Islamabad. There should be a better option instead of seal.we strongly condemn the decision of IHC #savemonal pic.twitter.com/H0s2250iKO

Monal in Islamabad is internationally famous point for tourists.There should be abetter option intead of seal..#savemonal pic.twitter.com/UP4BjtGuw4

tweet
Share on FacebookShare on TwitterShare on PinterestShare on Reddit
Saman SiddiquiJanuary 11, 2022
the authorSaman Siddiqui
Saman Siddiqui, A freelance journalist with a Master’s Degree in Mass Communication and MS in Peace and Conflict Studies. Associated with the media industry since 2006. Experience in various capacities including Program Host, Researcher, News Producer, Documentary Making, Voice Over, Content Writing Copy Editing, and Blogging, and currently associated with OyeYeah since 2018, working as an Editor.
All posts bySaman Siddiqui