Areas of upper Sindh likely to receive rain with windstorms till September 15. 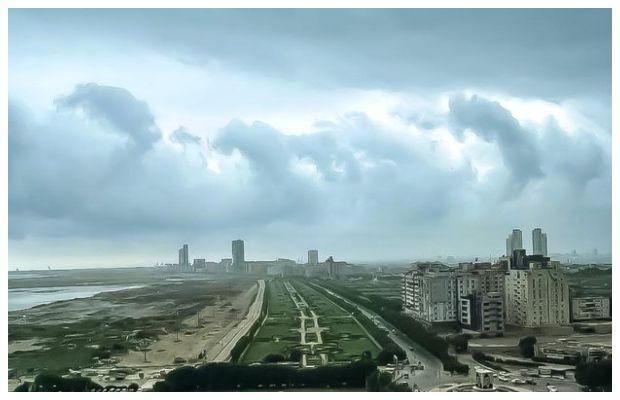 More Rain is Predicted for Karachi, while the weather is likely to remain hot and humid throughout the day in Karachi on Wednesday!

The two days of scattered thunderstorms have already added more to the misery of Karachiites while the Pakistan Meteorological Department (PMD) forecast Wednesday that Karachi is likely to witness another spell of rain with thunder and windstorms this afternoon or evening.

While the areas of upper Sindh are likely to receive rain with windstorms till September 15.

Several areas of Karachi received light to heavy showers for the second consecutive day on Tuesday under the influence of two weather systems over Indian Gujarat and Central India.

Due to heavy rain with strong winds on Tuesday, seven people were injured in different areas of Karachi in separate incidents of roof and wall collapses as the roads turned into ponds in the port city.

As reported, a muezzin was electrocuted to death, while three children and a woman among seven people were injured in two separate incidents of roof collapse.

Showers in different areas of Karachi caused inundation of roads and low-lying areas in the city, adding more to the misery of daily commuters as massive traffic jams were experienced on some of the thoroughfares following the rain.

According to the PMD, on Monday, Korangi received the heaviest rain at 34.6mm, followed by Quaidabad at 28.5mm, DHA at 24mm, University Road and Orangi Town at 20mm, Keamari at 16.2mm, Jinnah Terminal at 10.6mm, old airport 9.2mm, PAF Base Masroor 9mm, PAF Base Faisal 8mm and Nazimabad received 2.2mm of rain.

According to the MET prediction: “Under its influence, dust-thunderstorm/rain with isolated moderate to heavy falls were likely to continue at a few places in Tharparkar, Umerkot, Badin, Sanghar, Khairpur, and Mirpurkhas districts till September 15 with occasional gaps.”

tweet
Share on FacebookShare on TwitterShare on PinterestShare on Reddit
Saman SiddiquiSeptember 14, 2022
the authorSaman Siddiqui
Saman Siddiqui, A freelance journalist with a Master’s Degree in Mass Communication and MS in Peace and Conflict Studies. Associated with the media industry since 2006. Experience in various capacities including Program Host, Researcher, News Producer, Documentary Making, Voice Over, Content Writing Copy Editing, and Blogging, and currently associated with OyeYeah since 2018, working as an Editor.
All posts bySaman Siddiqui