Entry from Islamabad will stay closed till Sunday night. 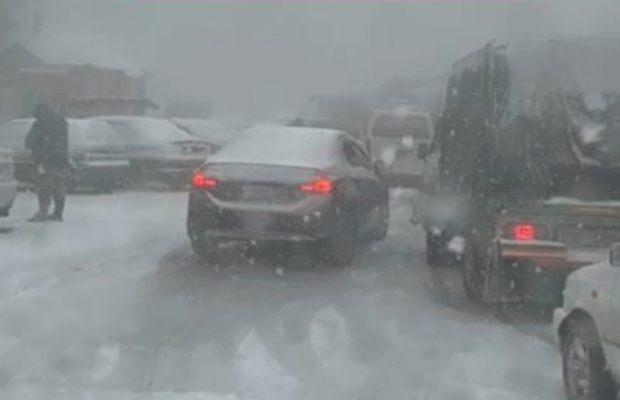 Murree has been closed for all types of traffic amid heavy snowfall on Friday.

The city district administration on Friday evening announced the decision to ban entry of vehicles in Murree after declaring an emergency amid heavy snowfall and tourists’ rush in the hill station.

Roads leading to Murree from Islamabad have been closed in the public interest because of traffic jams and the rush of visitors.

While the residents have been advised to stay indoors.

Entry from Islamabad will stay closed till Sunday night.

According to a statement from the Rawalpindi Deputy Commissioner (DC), it has been decided to close the entrance to deal with the emergency situation due to continuous heavy snowfall in Murree.

“We request all motorists and tourists to cooperate with the authorities,” the NHMP tweeted on Friday.

The motorway police further asked motorists to call on 130 if it is absolutely necessary for them to travel to Murree.

Earlier in the day, Minister for Interior Sheikh Rasheed on Friday evening requested tourists, especially families, to avoid travelling to Murree and Galiyat.

More than 100,000 vehicles have already entered Murree due to which the flow of traffic is extremely slow, he briefed the media.

He added that Islamabad and Murree administrations are working to facilitate tourists round the clock.

Galyat administration had urged the tourists to avoid entering the region as Murree, Ayubia, and other galis have become overcrowded.

Galyat Development Authority (GDA) Spokesperson Ahsan Hameed in an official statement on Friday said that Galyat has a large number of tourists, so do not travel further.

On the other hand,  Abbottabad Galyat Development Authority Director General Raza Habib talked to the media said Galyat region has a capacity of only 20,000 tourists.