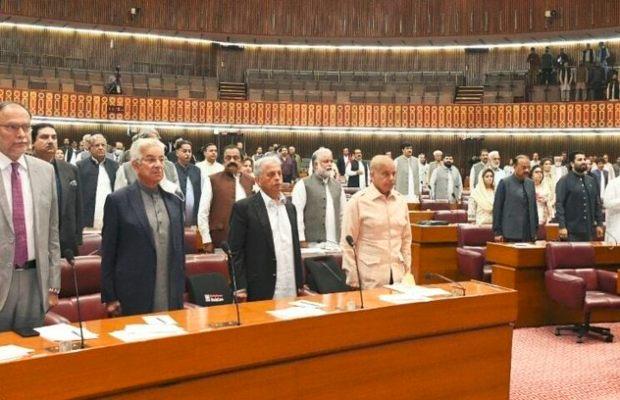 NA session adjourns till March 31 after no-confidence was tabled against PM Imran Khan on Monday.

Leader of the Opposition in the National Assembly and PML-N President Shahbaz Sharif tabled the no-confidence motion against Prime Minister Imran Khan in the lower house.

Deputy NA Speaker Qasim Suri asked the members of the Parliament to stand up to that their numbers could be counted, who were in the favour of the motion.

More than 155 lawmakers turned out to be in favour of tabling the motion against the premier.

The agenda of the National Assembly session for March 28 consisted of 27 points, including the no-confidence motion against Prime Minister Imran Khan.

The government’s numbers in NA stand at 179:

The no-confidence motion against the Prime Minister has 152 signatures.

According to the rules, a no-confidence motion cannot be voted before three days, but after three days and within seven days.