Naruhito, who became the first Japanese royal to study abroad, has pledged to continue his father's legacy and work to break down the barriers between the emperor and his subjects. 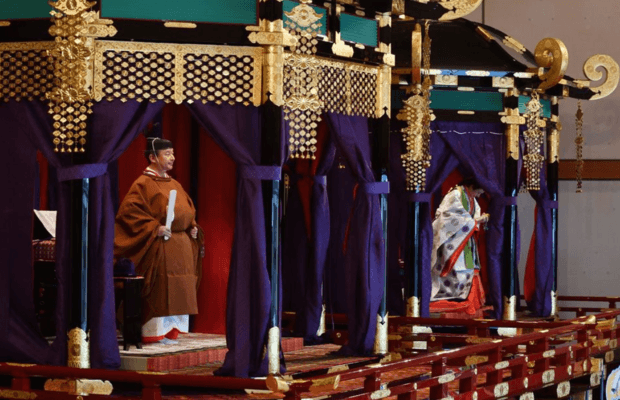 Japan’s Emperor Naruhito formally proclaimed his ascension to the throne in an elaborate ceremony on Tuesday. The centuries-old ceremony was attended by more than a hundred dignitaries from around the world.

Though the 59-year-old emperor officially began his reign on May 1 after the abdication of his father, the then-Emperor Akihito. Akihito was the first Japanese emperor to abdicate in 200 years, making way for the then-Crown Prince Naruhito and his wife Crown Princess Masako to ascend to the throne.

The deep purple curtains of Emperor’s canopy that was a  6.5-meter-tall throne were pulled apart to reveal him enrobed in an orange-brown garment, a black crown atop his head, as he announced his enthronement to the world. 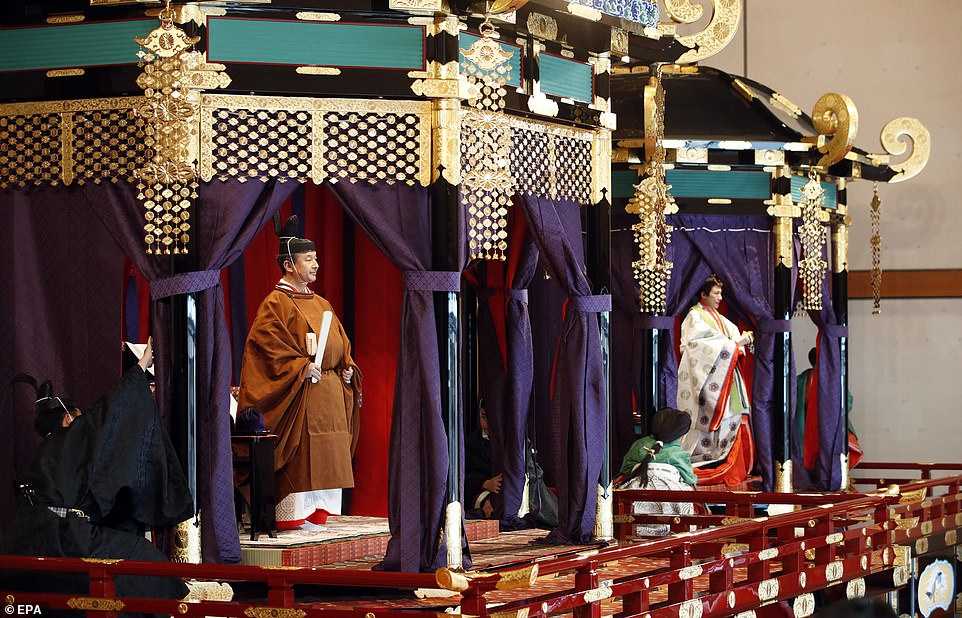 Naruhito then proclaimed his enthronement before an audience of the imperial family, reading from the from a large piece of paper.
“I pledge hereby that I shall act according to the Constitution and fulfill my responsibility as the symbol of the State and of the unity of the people of Japan, while always wishing for the happiness of the people and the peace of the world, turning my thoughts to the people and standing by them,” Naruhito said.
“I sincerely hope that our country, through our people’s wisdom and unceasing efforts, achieves further development and contributes to the friendship and peace of the international community and the welfare and prosperity of humankind.”

Japanese Prime Minister Shinzo Abe delivered a congratulatory address, in response to the emperor’s speech, saying, “We, the people, look up to His Majesty the Emperor as the symbol of Japan and the unity of its people, and, with a renewed spirit, will put our best efforts into creating an era where new culture will flourish as a peaceful, hopeful and proud Japan realizes a bright future and the people come together in beautiful harmony.”

The PM speech was followed by shouts of “Banzai!” meaning “long live the emperor”, thrice. 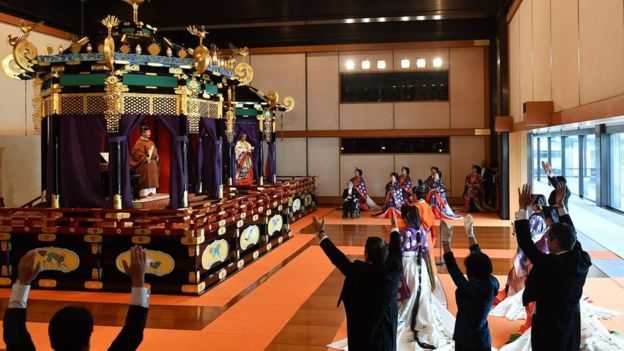 The dress that the emperor wore to the ceremony was the imperial robe in a warm brown hue, the color which has been reserved in times past especially for the emperor. Emperor Naruhito sat on the takamikura canopied throne, which was decorated with lacquer and gold phoenixes and placed atop of square dais.

Empress Masako was also dressed in regal attire, wearing a colorful and multilayered kimono. Reportedly clothed in 12 layers of robes.  She sat on a smaller version of Emperor Naruhito’s throne. 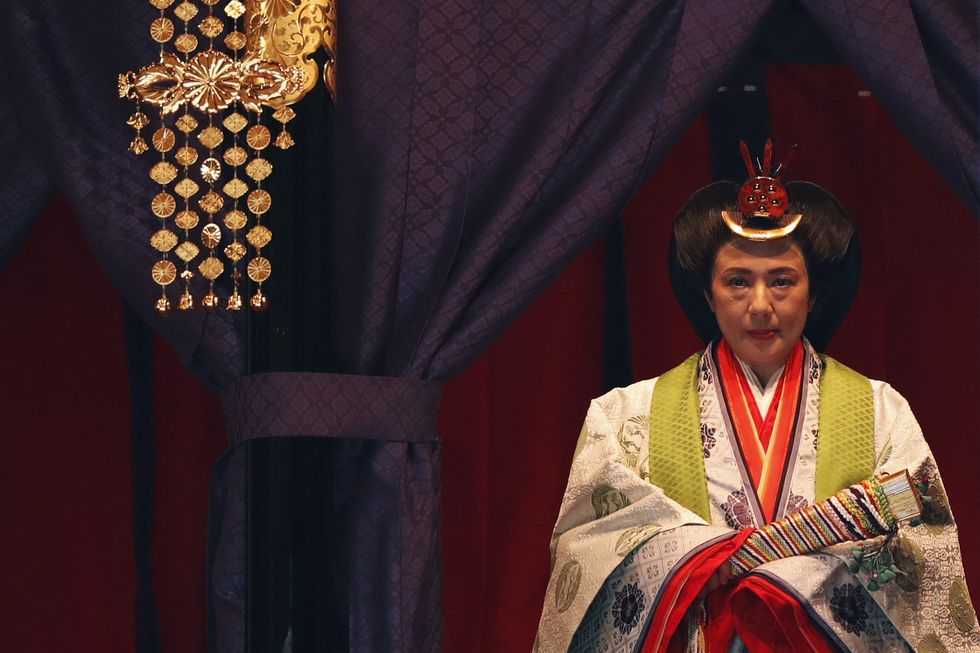 Naruhito’s ascension embarks the start of the “Reiwa” era, as Japan’s every emperor’s reign is marked by their era name. The name for Naruhito’s era has been adapted from the 8th-century anthology of classic poetry and which means “beautiful harmony.”

By the passage of time, the role of the emperor in Japan has evolved through a significant change. Once the emperor was considered the living embodiment of gods, now becomes only a large symbolic figure.

Unlikely to previous Japanese monarchs, Naruhito is a symbol of the state rather than the head of state, and the Japanese emperor wields no political power.

The role of Japan’s emperor changed significantly ever since Naruhito’s grandfather, Emperor Hirohito, sat on the throne from 29 April 1901 to 7 January 1989.

On Friday, the Japanse government has announced that about 550,000 petty criminals will be pardoned to mark the emperor’s enthronement.

Reportedly, As Naruhito ascended the throne, boxes were placed next to him,  believed to contain a sword and ancient jewel that, according to legend, dates back to the mythical forefather of Japan’s first emperor, Jimmu, who ruled almost 2,700 years ago.

Along with a fabled octagonal mirror, they form Japan’s royal regalia, or the Three Sacred Treasures. The sword and the jewel are so sacred that these objects have been seen in public or by the public. 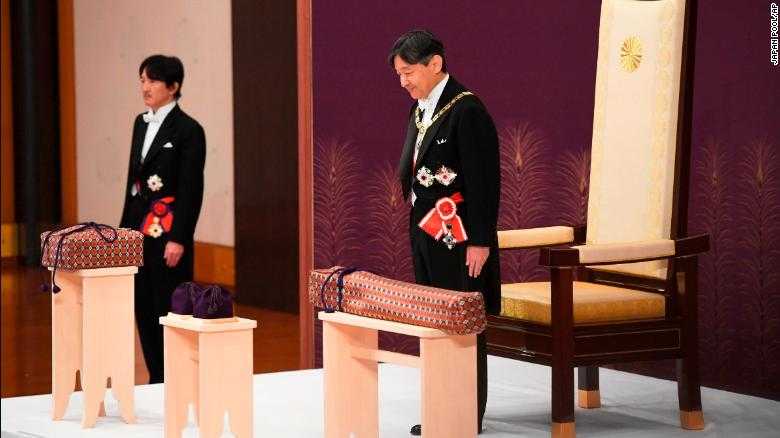 Here are a few selected photos from The Sokui no Rei – or the Ceremony of Accession:

This was Japan’s first enthronement ceremony in three decades to take place. Representatives from nearly 200 countries, including members of many royal families, were present to celebrate Emperor Naruhito’s accession to the Chrysanthemum Throne.