Known as NASA’s SpaceX Demo-2, the mission is an end-to-end test flight to validate the SpaceX crew transportation system, including launch, in-orbit, docking, and landing operations. 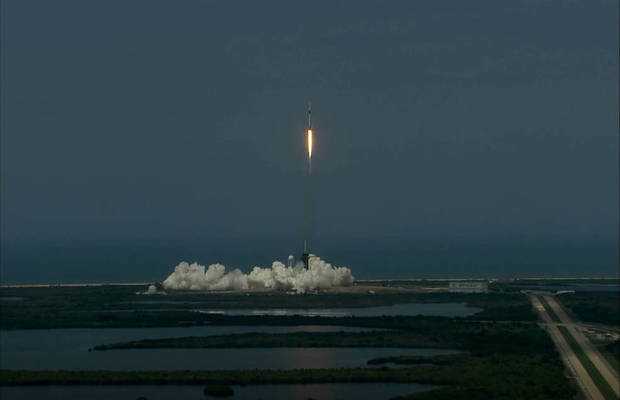 NASA astronauts for the first time in history have launched from American soil in a commercially built and operated American crew spacecraft on its way to the International Space Station.

The first booster stage of the rocket separated cleanly and landed upright on a barge off the Atlantic coast.

The second stage also separated smoothly, sending the astronauts in the Crew Dragon capsule on their way to the space station orbiting some 250 miles (450 kilometers) above the Earth.

Falcon 9 launches Crew Dragon on its first flight with @NASA astronauts on board! pic.twitter.com/FUd0SSRKud

NASA astronauts Robert Behnken and Douglas Hurley lifted off  in the SpaceX Crew Dragon spacecraft carrying at 3:22 p.m. EDT Saturday on the company’s Falcon 9 rocket from Launch Complex 39A at NASA’s Kennedy Space Center in Florida.

Known as NASA’s SpaceX Demo-2, the mission is an end-to-end test flight to validate the SpaceX crew transportation system, including launch, in-orbit, docking, and landing operations.

This is SpaceX’s second spaceflight test of its Crew Dragon and its first test with astronauts aboard, which will pave the way for its certification for regular crew flights to the station as part of NASA’s Commercial Crew Program.

NASA Administrator Jim Bridenstine, in a statement, said, “Today a new era in human spaceflight begins as we once again launched American astronauts on American rockets from American soil on their way to the International Space Station, our national lab orbiting Earth”,

“I thank and congratulate Bob Behnken, Doug Hurley, and the SpaceX and NASA teams for this significant achievement for the United States. The launch of this commercial space system designed for humans is a phenomenal demonstration of American excellence and is an important step on our path to expand human exploration to the Moon and Mars.”

Elon Musk, chief engineer at SpaceX, in a statement, said, “This is a dream come true for me and everyone at SpaceX”.

“It is the culmination of an incredible amount of work by the SpaceX team, by NASA, and by a number of other partners in the process of making this happen. You can look at this as the results of a hundred thousand people roughly when you add up all the suppliers and everyone working incredibly hard to make this day happen.”

tweet
Share on FacebookShare on TwitterShare on PinterestShare on Reddit
Saman SiddiquiMay 31, 2020
the authorSaman Siddiqui
Saman Siddiqui, A freelance journalist with a Master’s Degree in Mass Communication and MS in Peace and Conflict Studies. Associated with the media industry since 2006. Experience in various capacities including Program Host, Researcher, News Producer, Documentary Making, Voice Over, Content Writing Copy Editing, and Blogging, and currently associated with OyeYeah since 2018, working as an Editor.
All posts bySaman Siddiqui