The development came shortly after authorities deployed a heavy contingent of anti-riot and anti-encroachment personnel at the building. 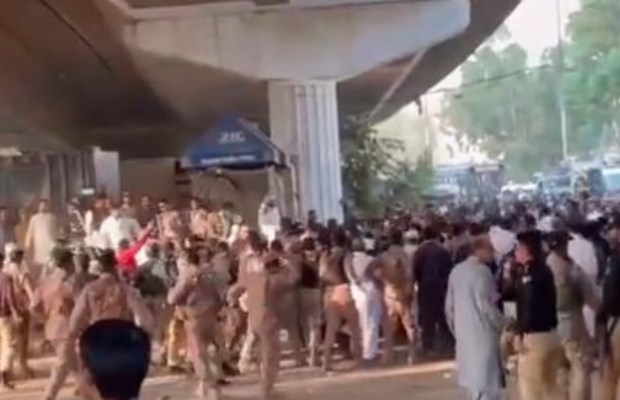 Police fired tear gas and baton-charged at citizens protesting against the demolition of Karachi’s Nasla Tower on Friday.

The development came shortly after authorities deployed a heavy contingent of anti-riot and anti-encroachment personnel at the building.

Due to the ongoing protest the Road heading towards Shahrah e Quaideen from Shahrah e Faisal was blocked.

The area tuned into a battle filed earlier in the day as the citizens  mostly the residents of the 15-storey residential building located at the intersection of Shahrah-e-Faisal and Shahrah-e-Quaideen , came out protesting against the building’s demolition on Supreme Court’s orders.

As being reported, the protesters started to gather near the Nasla Tower by 3 pm and their number grew gradually.

However, to disperse the protestors, the deployed police launched the baton charge and shelling around 4 pm.

Protesters were seen running in the streets nearby with policemen chasing them.

Nearby houses of the locality were also  affected by the tear gas which hampered traffic on the Sharah i Faisal as well.

The protest was  organised by the Association of Builders and Developers of Pakistan (Abad).

According to SSP (South), officials were trying to restore peace and said that tear gas shells were used in an effort to disperse the protesters.