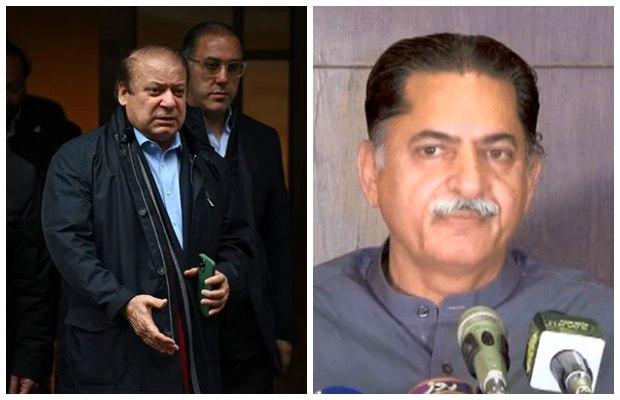 Nawaz Sharif is to return to Pakistan in September, claims Javed Latif!

Federal minister Javed Latif addressing a press conference on Monday in Lahore claimed that the PML-N supremo Nawaz Sharif — who is in a self-imposed exile in London on medical grounds — would return to the country in September.

he said the people had expressed their opinion and now wished for Nawaz’s return.

“The doctors change their opinion with time. The people are his doctors; the nation has announced its decision that Nawaz Sharif should come back,” Latif added.

Latif added the PML-N would not allow the party chief to go back to jail upon his return, explaining that the party felt “injustice” was committed against it.

PML-N leader alleged that Nawaz Sharif was disqualified on the instructions and directions of former chief justice of Pakistan Saqib Nisar.

Latif criticizing the PTI chairman added that “characters” like Khan have played their roles over the course of history.

“Quaid-e-Millat Liaquat Ali Khan was shot and to date, nobody knows who shot him; Madar-e-Millat Fatima Jinnah was declared a traitor, and General Ayub Khan stole her elections; Nawaz Sharif was declared a highjacker and sentenced.”

Latif’s statement comes after PTI Chairman Imran Khan, during his address in jalsa in Lahore on Aug 13, claimed that a conspiracy was being hatched to disqualify him in the Toshakhana and prohibited funding cases to pave the way for Nawaz Sharif’s return from London.

“They have made a new plan to register new cases and disqualify Imran Khan in Toshakhana and prohibited funding cases,” he said.

“Under the conspiracy, Nawaz will be brought back to the country by the end of September […] and a character assassination campaign will be launched to malign me, PTI Chairman Imran Khan said.

tweet
Share on FacebookShare on TwitterShare on PinterestShare on Reddit
Saman SiddiquiAugust 15, 2022
the authorSaman Siddiqui
Saman Siddiqui, A freelance journalist with a Master’s Degree in Mass Communication and MS in Peace and Conflict Studies. Associated with the media industry since 2006. Experience in various capacities including Program Host, Researcher, News Producer, Documentary Making, Voice Over, Content Writing Copy Editing, and Blogging, and currently associated with OyeYeah since 2018, working as an Editor.
All posts bySaman Siddiqui