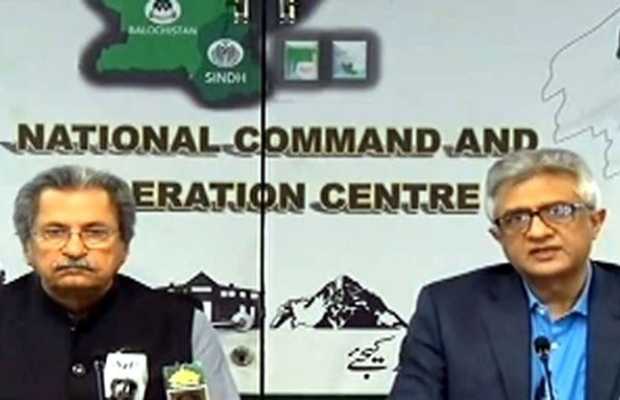 Due to the surge in coronavirus cases, the government has decided to closer the educational institutions in seven cities of Punjab.

The decision was announced by Education Minister Shafqat Mahmood in a press conference Wednesday.

The decision was taken in a meeting of the National Command and Operation Centre (NCOC) in Islamabad that was conducted to discuss the fate of educational institutions after surging in coronavirus cases in schools.

As per the decision, the educational institutions in seven cities of Punjab will close down for two weeks from March 15 (Monday) in light of rising Covid-19 cases.

Addressing a press conference alongside Special Assistant to the Prime Minister on Health Dr. Faisal Sultan, the federal minister said that there is a noticeable surge in coronavirus cases across Pakistan, however, the situation is not the same as it was in November-December.

“The rate of cases has spiked within a week,” he noted.

He added that the educational institutes in Faisalabad Gujranwala, Lahore, Gujrat, Multan, Rawalpindi, and Sialkot would be closed from Monday for two weeks.

Mahmood added that the same decision will also apply to educational institutions in Islamabad and also in Muzaffarabad.

All steps have to be taken while keeping in mind the nearly 50 million children that attend schools, colleges, and universities, said Shafqat Mehmood. “This is a sector that has a direct effect on the spread of the disease,” he said.

He stated that officials conducted an analysis of the situation in the entire country, adding that the situation in Sindh and Balochistan is satisfactory.” Therefore, it has been decided that 50 percent of all children would attend classes every day while maintaining social distancing and wearing face masks.”

Federal Minister specifies that in Khyber Pakhtunkhwa, the directive will only be applicable to schools in Peshawar where a high positivity rate has been recorded.

“In Peshawar, all educational institutions will remain closed from March 15 to March 28. Half of the students will keep attending classes in other districts.”

The decisions do not apply to examinations for O and A levels where students have to go and sit for the test. “The exams schools are taking will continue,” Shafqat Mehmood added.

He added it was previously decided that exams for grades 9,10, 11,, and 12 would be held during the period between May and June.

“I think schools should continue monitoring their situations individually and where they see something unusual, they should inform the authorities,” Minister added.

According to him, the officials conducted an analysis of the situation in the entire country, adding that the situation in Sindh and Balochistan was satisfactory. “Therefore, it was decided that 50 percent of all children would attend classes every day while maintaining social distancing and wearing face masks.”

The minister stated that all standard operating procedures (SOPs) previously enforced will continue to be followed. He added that on the other hand, the situation was not as satisfactory in Punjab, Khyber Pakhtunkhwa, and Azad Jammu, and Kashmir.

tweet
Share on FacebookShare on TwitterShare on PinterestShare on Reddit
Saman SiddiquiMarch 10, 2021
the authorSaman Siddiqui
Saman Siddiqui, A freelance journalist with a Master’s Degree in Mass Communication and MS in Peace and Conflict Studies. Associated with the media industry since 2006. Experience in various capacities including Program Host, Researcher, News Producer, Documentary Making, Voice Over, Content Writing Copy Editing, and Blogging, and currently associated with OyeYeah since 2018, working as an Editor.
All posts bySaman Siddiqui