NCOC head Asad Umar again stressed that the only way to stay safe from COVID-19 is vaccination. 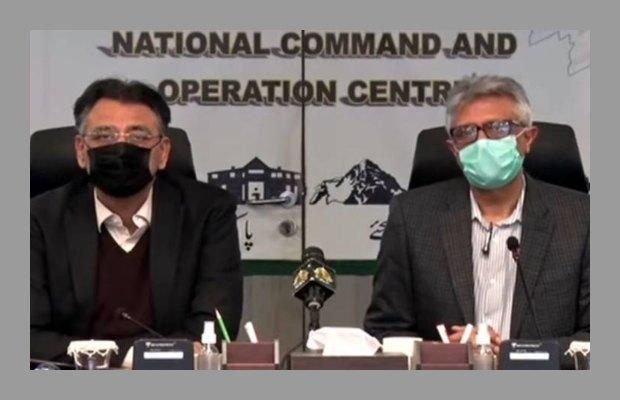 The National Command and Operation Center (NCOC) launches a door-to-door vaccination campaign across the country.

Under the first phase of the campaign, 55,000 mobile teams will vaccinate people at their homes for the next two months.

Addressing a press conference in Islamabad on Monday Special Assistant to the Prime Minister (SAPM) on Health Dr. Faisal Sultan and Minister for Planning and Development Asad Umar announced the decision.

“The NCOC (National Command and Operation Centre) has prepared for a massive campaign which is about to start in all areas of the country. Over 55,000 mobile teams will go and carry out vaccinations at homes,” Dr. Faisal Sultan said.

The SAPM urged people to cooperate with the mobile vaccination teams and welcome them.

Sharing data about vaccination so far, the federal minister Asad Uma said that 80 million people have been fully vaccinated while 10 million others received a single dose of the COVID-19 vaccine.

He added that 2.6 million people also received the booster dose.

“It has been noticed during the current fifth wave of COVID-19 that the people in the areas with high vaccination rates have minor symptoms of the disease,” Asad Umar said.

tweet
Share on FacebookShare on TwitterShare on PinterestShare on Reddit
Saman SiddiquiFebruary 1, 2022
the authorSaman Siddiqui
Saman Siddiqui, A freelance journalist with a Master’s Degree in Mass Communication and MS in Peace and Conflict Studies. Associated with the media industry since 2006. Experience in various capacities including Program Host, Researcher, News Producer, Documentary Making, Voice Over, Content Writing Copy Editing, and Blogging, and currently associated with OyeYeah since 2018, working as an Editor.
All posts bySaman Siddiqui