Netflix’s Riverdale spin-off is a horror centric teen drama, with a captivating edge. 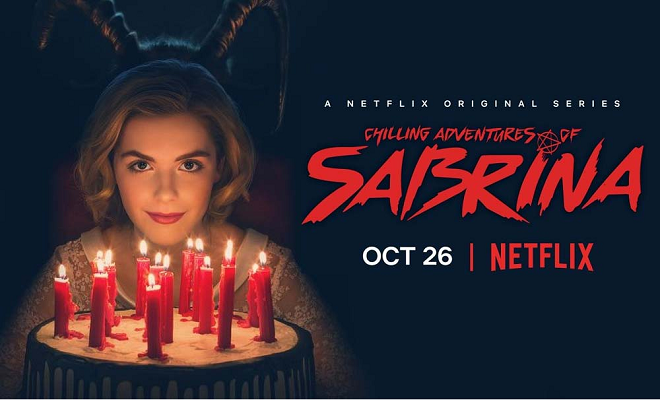 “Chilling Adventures of Sabrina” the Netflix’s twist on ’90s sitcom Sabrina The Teenage Witch could be your weekend binge. The series is a “darker” reboot of the Archie Comics show. The Mad Men’s Kiernan Shipka stars as the eponymous teenage witch.

Sabrina Spellman is half witch and half mortal. On her 16th birthday, Sabrina has to make a choice between the witch world of her family and the human world of her friends.

What is expected of her is to take part in a sort of communion ceremony and pledge her eternal allegiance to the Dark Lord, as she is a born witch. Her father was a High Priest of the Church of Night and her mother was a ‘mortal’ who died under mysterious circumstances and she was sent to live with her two aunts.

Approving her allegiance to the Dark Lord would mean to drop out of her school and enrolling at the Academy of Unseen Arts. There Sabrina will learn to harness her powers as a witch, and would be expected to turn her back on her mortal side, once and for all.

But there is a lot of adventure she has to face while realizing what her powers are. With her aunts (Miranda Otto, Lucy Davis), her cat Salem, and her boyfriend Harvey Kinkle (Ross Lynch), Sabrina will be facing the horrors and new adventures in the mysterious town of Greendale.

This time the representation of magic is more closely aligned to the medieval and the Renaissance concept of witches, who were believed to have been given with the power of Satan himself. And the Lucifer also makes a few appearances in the show, in the form of a weird goat monster, echoing medieval renderings and the devil of Goya’s haunting Witches’ Sabbath.

Season 1 has 10 episodes, each will take the audience to the witch fantasy adventures. Netflix’s Riverdale spin-off is a horror centric teen drama, with a captivating edge. Where the witchcraft is set in the 16th century and the teenage girl of 21st century sets some creepy spine chilling scares.