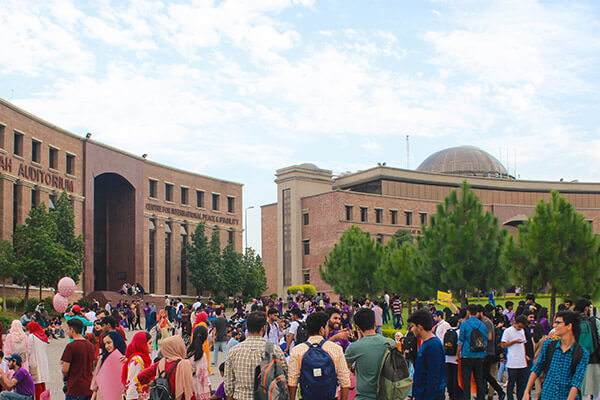 National University of Sciences and Technology (NUST) has landed in a major controversy as it downgraded an alleged rape case on its premises and refuted to victim-blaming on its official social media accounts.

As per Dawn news, who is independently verifying the claims, “a female student was sexually assaulted by a construction worker behind the girls’ hostel” and her complaint to the administration was not paid any heed to.

However, when the news of the alleged rape at the Islamabad campus surfaced on social media, the varsity dismissed the victim’s claims before any legal proceedings could take place.

It is reported that even an FIR of the incident has not been lodged so far as NUST claims to have “thoroughly investigated the matter”.

“Let’s start with the thought-provoking fact that false rape allegations ruin lives, reputations, and futures. Indeed, propagating such incorrect news is the most horrendous and shameless of acts,” it continues.

“Recent posts about the alleged rape of an NUST student are nothing but a heinous attempt to defame this prestigious seat of learning, a desperate act of seeking attention, and a complete hoax!” further said the university statement.

NUST also claimed that “a thorough investigation into the matter has been carried out”.

“The security and well-being of everyone on campus is an absolute priority for NUST management. The investigation has revealed that no such incident has taken place. Please rest assured that NUST is safe, and people have no reason to pay heed to this deceitful accusation,” concluded NUST. 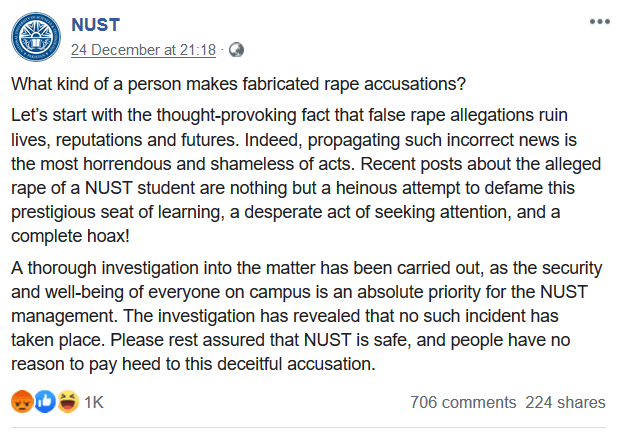 However, the statement did not go down well with social media users who accused NUST of trying to cover up the horrendous crime for the sake of its reputation. Many also demanded the university to carry out an impartial and genuinely thorough investigation before slandering the victim.

“It is problematic for any institution or individual to immediately defame the victim instead of presenting themselves for an immediate & thorough investigation. This behaviour seriously damages a victim’s ability to seek help & justice,” said Salman Ahmed, international public policy and gender reforms specialist on Twitter.

Salman Ahmed also tweeted that he intends to move the case in Islamabad High Court and expects NUST to act in good faith.

“I have decided to move to #IHC with the help of Mustafa Ramday to compel NUST for an independent investigation into rape allegations,” tweeted the activist.