Organised malicious propaganda being run against the Pak Army & its leadership: DG ISPR 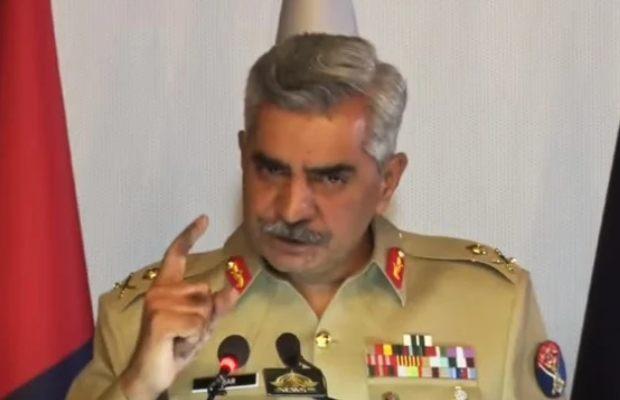 An organised malicious propaganda is being run against the Pakistan Army and its leadership, DG ISPR

He briefed journalists on the recently held 79th Formation Commanders’ Conference at the General Headquarters, Rawalpindi.

Gen Iftikhar said that the formation commanders expressed confidence in the steps taken for the country’s security, especially on account of international security and the Pakistan Army’s role in upholding the rule of law.

“All of them agreed that democracy, the strength of institutions and rule of law, and all the institutions working within the constitutional limits is the guarantor of national interest,” DG ISPR said.

He said that the nation’s support is the core of the army’s strength and without it, the concept of national security is meaningless.

Gen Iftikhar said that that is why any intentional or unintentional effort that becomes the reason for creating a rift between the nation and armed forces is against the broader national interest.

“An organised malicious propaganda is being run against the Pakistan Army and its leadership. Even fake audio messages of different retired senior military officials are being created using a deep-fake technology to create a divide between the nation and armed forces.

“This is illegal, unethical, and totally against national interest,” he said.

“We want to stay out of it. Keep us out of this discourse,” he said, adding that this campaign didn’t get successful ever in the past nor will it in the future.

Chief of Army Staff (COAS) General Qamar Javed Bajwa is neither asking for an extension nor will he accept it, the DG ISPR said in response to a question by a journalist.

DG ISPR, responding to another question, reiterated that the army has nothing to do with politics.

“There is no interference by the Army in any by-election or local bodies election.”

He said that it was said that “calls were received”, therefore evidence should be brought to the fore if there is any.

ISPR DG clarified that the word “conspiracy” was not used in the statement issued after a meeting of the National Security Committee last month.

His clarification came in response to a journalist’s question.

He was asked about the military leadership’s stance on former prime minister Imran Khan’s claims that it acknowledged the “foreign conspiracy” in the NSC meeting.

Gen Iftikhar responded that he cannot discuss what was said in the meeting.

He added that the stance of the military leadership was conveyed in the meeting as well as the statement issued after it.

“Whatever the meeting concluded is present in the statement,” he said, adding that Pakistan’s military agencies are working day and night against such plots and will not let them get successful.

While responding to a question about the BBC report on events that took place at the Prime Minister’s House on the night of Imran Khan’s ouster from power, Maj Gen Babar said that it is a “false story” and nothing but a pack of lies”.

tweet
Share on FacebookShare on TwitterShare on PinterestShare on Reddit
Saman SiddiquiApril 14, 2022
the authorSaman Siddiqui
Saman Siddiqui, A freelance journalist with a Master’s Degree in Mass Communication and MS in Peace and Conflict Studies. Associated with the media industry since 2006. Experience in various capacities including Program Host, Researcher, News Producer, Documentary Making, Voice Over, Content Writing Copy Editing, and Blogging, and currently associated with OyeYeah since 2018, working as an Editor.
All posts bySaman Siddiqui