Pakistan capable of giving a response which would surprise India if any war is imposed, DG ISPR

“How would Pakistan benefit from Pulwama attack in light of these events? Pakistan would be at a loss,” Major General Asif Ghafoor stressed addressing the press conference 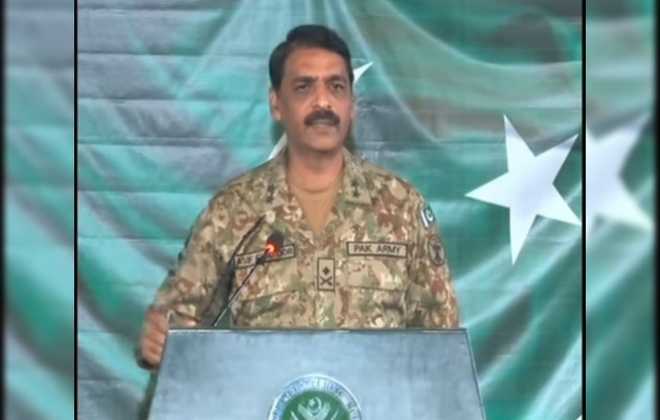 Major General Asif Ghafoor, Director General of the Inter-Services Public Relations (ISPR), on Friday said Pakistan was capable of giving a response which would surprise India if any war is imposed.

Addressing a press conference, DG ISPR refuted reports regarding Pakistan preparing for war and said, “Pakistan is not preparing for war. Threats and reports of war are coming from your side. We are only using our right to self-defense.”

“We do not wish to go into war but please be rest assured should you [India] initiate any aggression, first you shall never be able to surprise us. Pakistan armed forces shall never be surprised by you, but let me assure you, we will surprise you. We should also because you initiate, we shall also dominate the escalation ladder. We shall have a superior force ratio at a decisive point. Never think that due to our commitments elsewhere we will have any capacity lack. We have the singleness of conception, from the prime minister down to a citizen, from three chiefs down to a soldier. All political parties all segments of life, 207 million Pakistanis, we have the singleness of conception,” the DG ISPR warned Indian leadership’s threats of waging war on Pakistan.

DG ISPR asserted, “We can respond to full spectrum threat. And I hope you get us and don’t mess with Pakistan”.
He further explained, “On February 14, a Kashmiri youngster targeted Indian security forces. After the incident, India starting bombarding Pakistan with allegations without any thought or proof. Pakistan took time to respond. We wanted to investigate the allegations and when we were sure-footed, the prime minister of Pakistan responded.”

“The prime minister made an offer to India which has never been made before. The premier offered to probe India if actionable evidence is shared. We hope India will wisely consider Pakistan’s offer for peace”, he maintained.

Major General Ghafoor continued, “64% of our population is youth and we are in fifth generation warfare, so their target is the youth of Pakistan. We have a 72-year history. In 1947, Pakistan obtained independence and this is something India has not been able to accept till date. In 1965, tensions emerged at the LoC and our country which was progressing was affected. Then in 1971, our distance from East Pakistan was exploited, however, we were able to get through that as well because of our resilience. From 1971 to 1984, there were no incidents on our eastern border and we began progressing again. But then one day, the Siachen incident happened when the Pakistan Army wasn’t there.”

“Then India moved towards nuclear weapons and in 1998, we obtained nuclear power. Then in 2008 we were fighting a decisive war against militants and emerging successful so India started to mobilize its troops on the border,” he added.

“Whenever the situation improves in Pakistan, India tries to destabilize the country,” the head of the military’s media wing asserted.

“In February, when the Pulwama attack happened there were eight important events in Pakistan — Saudi crown prince’s visit, the Afghan reconciliation process, UNSC talking about terror listing, EU deliberating on human rights violations in occupied Kashmir, Kulbhushan Jadhav hearing, FATF hearing and decision on Pakistan, PSL and Kartarpur meeting. The elections are upcoming in India and the indigenous struggle in occupied Kashmir is high.”

DG ISPR further continued, “The attack took place miles away from the Line of Control (LoC) and the explosives used were not from Pakistan. The car used was not from Pakistan either. The attack was carried out by a youngster from occupied Kashmir who was mistreated by Indian security forces.”
“People in Indian media and social media had predicted an attack like this prior to the elections”, he also added.
On being questioned whether Pakistan is in diplomatic isolation, DG ISPR replied, “You have seen how the heads and delegations of foreign countries are visiting.”

During the press conference, speaking about former chief of the Inter-Services Intelligence (ISI) Lieutenant General (retd) Asad Durrani, DG ISPR said, “He has been found guilty of violating the military code of conduct. His pension and other benefits have been stopped.”

“Two senior military officials are under arrest for espionage. They are not part of a network and the army chief has ordered their court-martial,” he further said.

tweet
Share on FacebookShare on TwitterShare on PinterestShare on Reddit
Saman SiddiquiFebruary 22, 2019
the authorSaman Siddiqui
Saman Siddiqui, A freelance journalist with a Master’s Degree in Mass Communication and MS in Peace and Conflict Studies. Associated with the media industry since 2006. Experience in various capacities including Program Host, Researcher, News Producer, Documentary Making, Voice Over, Content Writing Copy Editing, and Blogging, and currently associated with OyeYeah since 2018, working as an Editor.
All posts bySaman Siddiqui