Prime Minister Imran Khan has questioned the international community for being silent on Indian-occupied Kashmir. 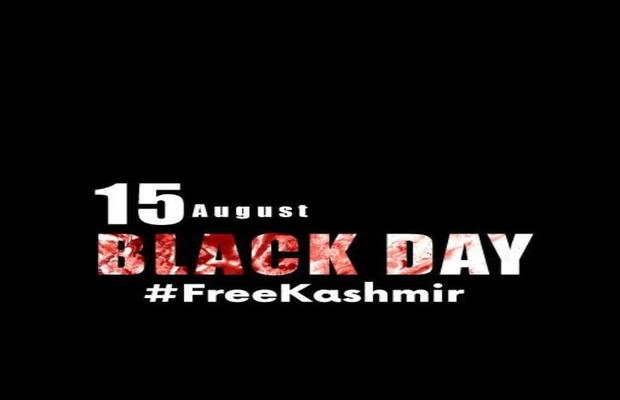 August 15, India’s Independence Day, is being observed as a black day across Pakistan to protest the brutalities and human rights abuses in occupied Kashmir.

The prime minister, in a couple of tweets, sought to draw international attention towards the Indian move to end occupied Kashmir’s autonomy by revoking Article 370 of its Constitution.

In a post shared in social media Prime Minister Imran Khan has questioned the international community for being silent on Indian-occupied Kashmir and warned that should ethnic cleansing of Muslims take place in the region, there would be severe repercussions in the Muslim world.
https://twitter.com/ImranKhanPTI/status/1161864124252512257

Protests and demonstrations were held across the country, and Pakistani flags flew at half-mast to observe Black Day.

People including PM Imran Khan, politicians, and other prominent figures have replaced their social media profile pictures with black squares.

Prime Minister Imran Khan on Wednesday has vowed to become the voice of Kashmir and raise the issue at every global forum, including the United Nations, as he questioned the silence of the international community on the situation in the region.

While addressing a special session of Pakistan-administered Kashmir’s Legislative Assembly in Muzaffarabad, Khan said that if a war breaks out between Pakistan and India, the world community will be responsible.

“The world’s eye is on Kashmir and on Pakistan. I will be the ambassador who raises Kashmir’s voice at every international forum,” he said.

tweet
Share on FacebookShare on TwitterShare on PinterestShare on Reddit
Saman SiddiquiAugust 15, 2019
the authorSaman Siddiqui
Saman Siddiqui, A freelance journalist with a Master’s Degree in Mass Communication and MS in Peace and Conflict Studies. Associated with the media industry since 2006. Experience in various capacities including Program Host, Researcher, News Producer, Documentary Making, Voice Over, Content Writing Copy Editing, and Blogging, and currently associated with OyeYeah since 2018, working as an Editor.
All posts bySaman Siddiqui