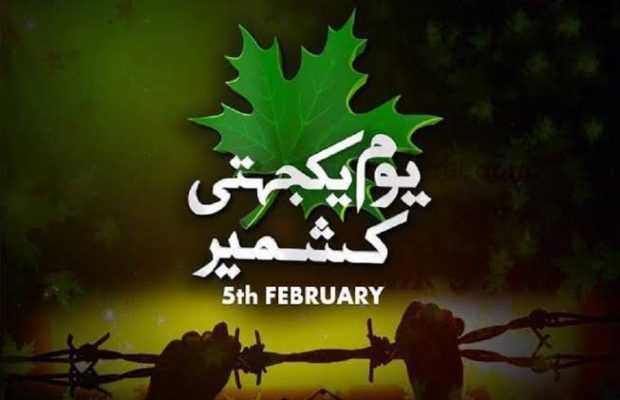 Pakistan today is observing Kashmir Solidarity Day nationwide to express solidarity with the Kashmiri people for their inalienable right to self-determination under United Nations resolutions.

The day in Pakistan was marked with public rallies, solidarity walks, and special messages for the Kashmiri brothers. A number of events were organised in a novel manner to expose the tattered and sham face of so-called Indian democracy prevailing in Delhi that revoked the special status of Kashmir on August 05, 2019.

The day saw one-minute silence observed at 10:00 am across the country and human chains formed at Kohala, Mangla, Holar and Azad Pattan points linking Pakistan and AJK.

“Setting aside all political difference, we as a nation would have to unite on a single agenda to liberate the people of Kashmir from the clutches of the Indian government,” said CM Shah.

“If International Community is interested in the peace in the region it would have to take notice of Modi government crimes in Kashmir and force him to restore the rights of suppressed people of Kashmir by withdrawing heavy police and armed forces from the valley,” he added.

President of Pakistan Dr. Arif Alvi and Prime Minister (PM) Imran Khan, in their separate messages on the occasion of Kashmir Solidarity Day, have called upon the international community to hold India accountable for its crimes against humanity in the Indian Illegally Occupied Jammu and Kashmir (IIOJ&K).

Denial of this right and subjugation of Kashmiris is the very negation of human dignity,” Radio Pakistan quoted the president as saying.

President Alvi further added that the “demographic apartheid” in occupied Kashmir, under which the “Kashmiris’ majority is being turned into a minority”, is a violation of international law.

A message posted for Kashmiris on the President of Pakistan’s official  Twitter account said: “Your freedom from clutches of illegal Indian occupation is not far.”

He also conveyed a message to the international community saying: “You must intervene & be on right side of history by fulfilling your promise of a plebiscite in line with UN resolutions to restore peace in Kashmir.”

Prime Minister Imran Khan in his message on Kashmir day said that Pakistan will remain unshakable in its solidarity with the Kashmiri people until they realize their inalienable right to self-determination.

PM Imran Khan also reaffirmed Pakistan’s resolute support for the Kashmiri brothers and sisters, who continue to be subjected to an inhuman military siege and communications blockade since August 5, 2019.

tweet
Share on FacebookShare on TwitterShare on PinterestShare on Reddit
Saman SiddiquiFebruary 5, 2021
the authorSaman Siddiqui
Saman Siddiqui, A freelance journalist with a Master’s Degree in Mass Communication and MS in Peace and Conflict Studies. Associated with the media industry since 2006. Experience in various capacities including Program Host, Researcher, News Producer, Documentary Making, Voice Over, Content Writing Copy Editing, and Blogging, and currently associated with OyeYeah since 2018, working as an Editor.
All posts bySaman Siddiqui