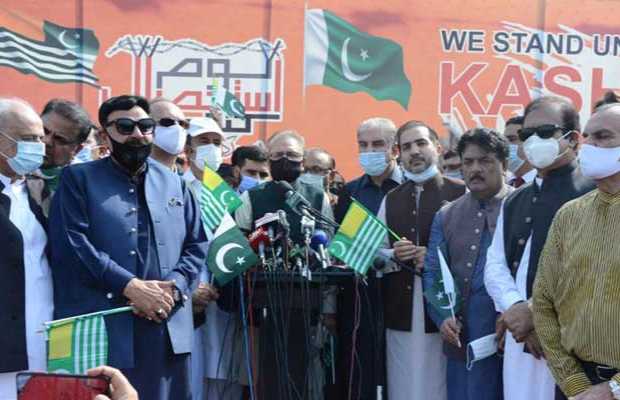 Pakistan observed Youm-e-Istehsal Kashmir on Thursday to express solidarity with the people of Kashmir, as it marks two years of Indian occupied Kashmir’s(IoK) military siege.

The day marks the second anniversary of India’s abrogation of Article 370 of its constitution in a bid to integrate its only Muslim-majority region of India-administered Kashmir with the rest of the country.

A number of events were held across the country to denounce the Indian unilateral, illegal actions against the Kashmiri people. Solidarity walks of one mile will be arranged in all the main cities, including Islamabad.

India has failed in breaking Kashmiris’ will despite all tactics: PM Imran Khan

In his message on Youm-e-Istehsal, Prime Minister Imran Khan called upon the international community, including the United Nations, human rights organizations, and the global media, to hold India accountable for its crimes against the Kashmiri people.

“India’s illegal and unilateral actions of 5 August 2019 and subsequent measures particularly pertaining to domicile rules and the land ownership laws are aimed at changing the demographic structure of IIOJK and converting the Kashmiris into a minority in their own land, ” he added.

President Dr. Arif Alvi marking the day has said that Pakistan solidly stands by Kashmiris in their just struggle for the right to self-determination and will continue to highlight the Jammu and Kashmir dispute at the international fora.

In his message on the Youm-e-Istehsal, the President said the day serves as a reminder to the international community to hold India accountable for its actions and deliver on its promise to the Kashmiris.

President Alvi said a just and peaceful settlement of the Jammu and Kashmir dispute, in accordance with relevant UN Security Council resolutions and the wishes of the Kashmiri people, is indispensable for durable peace and stability in South Asia. 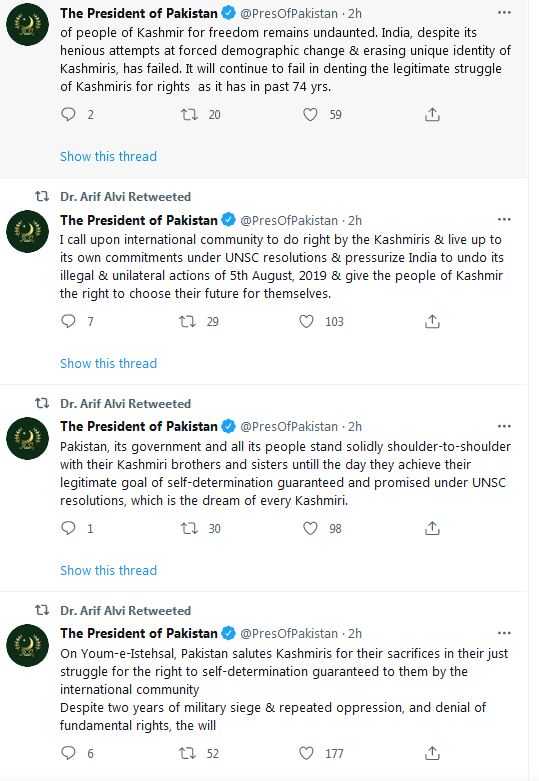 In his message on the occasion, Chief of Army Staff General Qamar Javed Bajwa said the resolution of the Kashmir dispute as per the UN resolutions and aspirations of the Kashmiri people is imperative for enduring peace and stability in the region.

COAS Qamar Bajwa’s message was shared on Twitter in a series of tweets.

“Resolution of Kashmir dispute as per UN Resolutions and aspirations of Kashmiri people is imperative for enduring peace and stability in the region,” COAS. 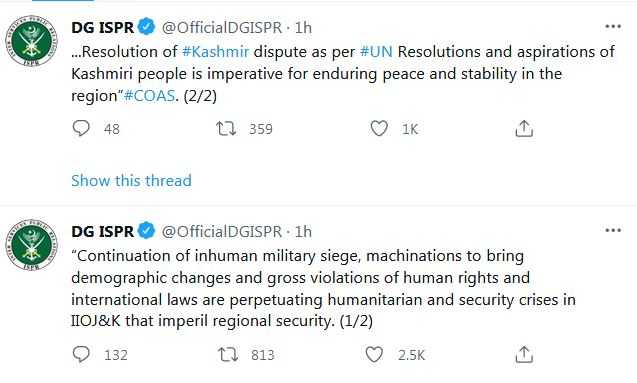