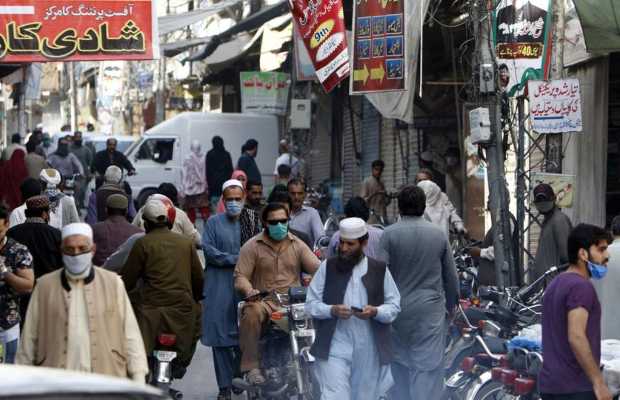 The total count of active cases in the country has now surged to 31,107. While the positivity ratio was recorded at 8.73 percent during the past day.

While, 2,900 patients are in critical condition across the country, whereas, 2,092 people recovered from the deadly disease during the last 24 hours.

According to the latest statistics of the National Command and Operation Centre (NCOC). a total of 41,960 tests were conducted across the country in the last 24hours period.

Since the detection of the first COVID-19 case in the country, overall 9,773,993 tests have been conducted so far.

Punjab remains the most affected province from the third wave of COVID-19. The province for the straight second day recorded more than 2,000 new cases as 2,090 infections were detected in the last 24 hours. A day earlier it reported 2,033 cases.

Furthermore, 30 more COVID-19 related deaths were reported in Punjab, taking the total number of fatalities to 5,974.

While there was no death case reported.

As being reported, 8,975 tests were conducted across the province in the 24-hour period, while 146 more people recovered.

KP has reported 592 new cases and 6 COVID19 related deaths. The news cases have taken the provincial tally of infections to 79,245 and the death toll to 2,208.

Balochistan on Sunday reported  21 new infections, taking its caseload to 19,327.

Meanwhile,  the authorities have banned all public gatherings in the provincial capital Quetta and tourist resorts have also been closed with immediate effect.

According to a notification issued by the Quetta deputy commissioner, the decision was taken in view of the current Covid-19 situation which has seen cases rise across the country.

“In case of non-compliance, strict legal action will be taken under the relevant provision of the law against violators,” the notification said.

The breakdown of coronavirus cases and deaths in the federally administered territories is as follows:

On the other hand,  the Interior Ministry Sheikh Rashed Ahmed said that there was no plan for an immediate lockdown in Islamabad and that any decision in this regard can only be taken on the recommendation of the National Command and Operation Centre (NCOC).

Refuting reports of a nationwide lockdown, Shaikh Rashid issued a video statement that said, “I did not say at all that a lockdown will begin on Monday. False reports attributed to me have been circulating.”

“I did not speak of a complete, nationwide lockdown at all. So I wish to say to everyone, this is a false report being circulated,” Shaikh Rashid said.

He added that the decision, in any case, will be taken by the NCOC and does not fall under the purview of the Interior Ministry.

Meanwhile, the National Command and Operation Centre (NCOC) chief Asad Umar a day earlier has shot down rumours of a complete lockdown being imposed across the country.

The federal minister said instead of a complete lockdown, “targeted interventions” may increase.

“Complete lockdown is not the solution,” he said. “We tried to explain that to people during the first wave [of the coronavirus] but they did not understand. You cannot shut down the entire country and steal people’s livelihoods,” added the minister.

tweet
Share on FacebookShare on TwitterShare on PinterestShare on Reddit
Saman SiddiquiMarch 21, 2021
the authorSaman Siddiqui
Saman Siddiqui, A freelance journalist with a Master’s Degree in Mass Communication and MS in Peace and Conflict Studies. Associated with the media industry since 2006. Experience in various capacities including Program Host, Researcher, News Producer, Documentary Making, Voice Over, Content Writing Copy Editing, and Blogging, and currently associated with OyeYeah since 2018, working as an Editor.
All posts bySaman Siddiqui