Saudi crown prince’s visit is being termed as the defining moment for Pakistan. 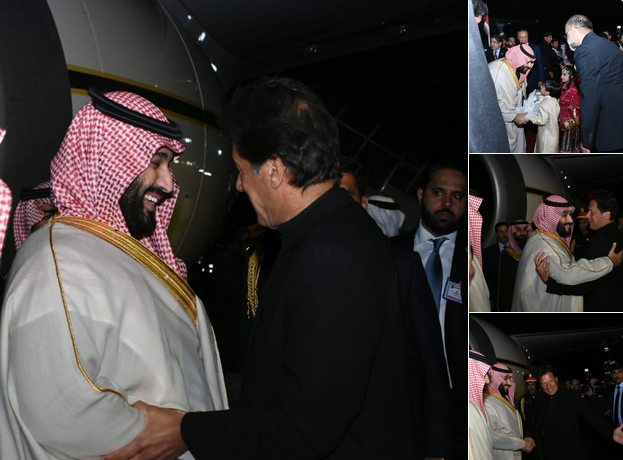 Pakistan has rolled out the red carpet for Saudi Crown Prince Mohammad Bin Salman’s 2-day state visit to the country. During his stay, Saudi Arabia and Pakistan will sign a number of agreements and MoUs in diverse sectors including investment, finance, power, renewable energy, internal security, media, culture, and sports.

The Saudi crown prince, widely known as “MbS”,  is accompanied by a high-powered delegation, including members of Saudi Royal family, key ministers, and leading businesspersons.

Saudi Prince Salman left for Prime Minister House after arrival, being driven personally by PM Imran Khan, Where he will be presented with a 21-gun salute and a guard of honour.

Fighter jets of Pakistan Air Force escorted the airplane of Crown Prince Mohammad Bin Salman upon arrival in the airspace of Pakistan.

Federal capital is decorated with banners featuring Crown Prince photos, which have been hung across the capital. Strict security arrangements and measures have been implemented. A public holiday has also been declared on Monday due to this visit.

The crown prince’s portraits have been hung on the Parliament building. The portraits measure 120 feet by 45 feet.

tweet
Share on FacebookShare on TwitterShare on PinterestShare on Reddit
Saman SiddiquiFebruary 17, 2019
the authorSaman Siddiqui
Saman Siddiqui, A freelance journalist with a Master’s Degree in Mass Communication and MS in Peace and Conflict Studies. Associated with the media industry since 2006. Experience in various capacities including Program Host, Researcher, News Producer, Documentary Making, Voice Over, Content Writing Copy Editing, and Blogging, and currently associated with OyeYeah since 2018, working as an Editor.
All posts bySaman Siddiqui