The man who jumped off the fence and saved the Holy Quran from burning, in the anti-Islam protest in Norway, have won millions of hearts! 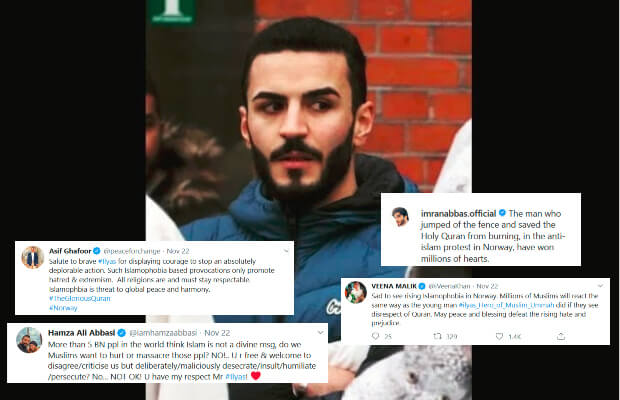 Many celebrities, including millions of Pakistanis, are hailing the courage of a young Muslim named Ilyas as the hero of Muslim world for stopping the desecration of the Holy Quran.

The incident took place on November 16 during an anti-Islam rally in Norway after a leader of the extreme right-wing, Lars Thorsen, tried to desecrate a copy of the holy book in Kristiansand.

Many of the celebrities took to social media to convey their messages on this incident and bravery of young man, who according to media reports has been released after being arrested on Nov 16.

Hamza Ali Abbasi who announced his retirement from the showbiz industry and now wants to use his name ,  popularity, and fame to serve religion, took to social media to share his thoughts over this recent incident.

“More than 5 BN ppl in the world think Islam is not a divine msg, do we Muslims want to hurt or massacre those ppl? NO! U r free & welcome to disagree/criticise us but deliberately/maliciously desecrate/insult/humiliate/persecute? No… NOT OK! U have my respect Mr #Ilyas”, wrote Hamza Ali Abbasi.

Imran Abbas also took to social media hailing the young hero of the Muslim world, Ilyas. In an Instagram post,  Imran Abbas wrote, “The man who jumped off the fence and saved the Holy Quran from burning, in the anti-Islam protest in Norway, have won millions of hearts”.

Veena Malik also took to social media, all in praises for Ilyas.

Sharing the video clip of the event he wrote, “Salute to brave #Ilyas for displaying the courage to stop an absolutely deplorable action. Such Islamophobia based provocations only promote hatred & extremism. All religions are and must stay respectable. Islamophobia is a threat to global peace and harmony”.

Former cricketer Shahid Afridi has requested Norway’s government to look into the matter, that has affected sentiments of millions of Muslims around the world.