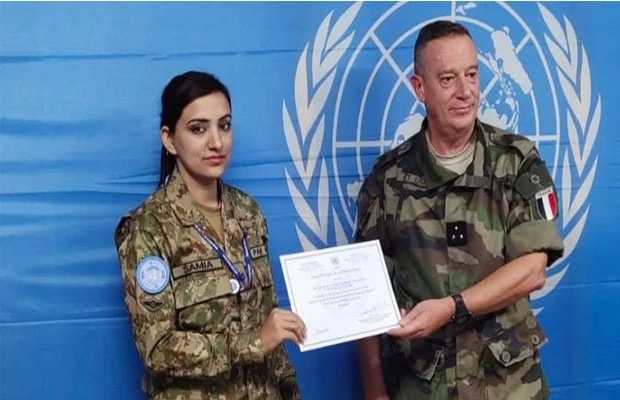 Among the 15 Pakistan Army’s female officers deployed as a part of the UN Peacekeeping Mission in the Democratic Republic of Congo, Major Samia Rehman too is unable to come home due to Coronavirus. But despite the odds being against her, Major Samia is determined to fight the pandemic that has crippled the lives of many like her.

For her determination and high spirits, the Pakistan Army officer was yesterday hailed as ‘Peacekeeper of the Day’ by UN’s Twitter account of the mission.

Peacekeeper of the Day:
"My duty was ending on 6 April, but I'm unable to go home due to #COVID19. My 2-yr-old is asking, 'Mama, when will you be back?' I'm worried, but my passion for work has increased manifolds. Together we can slow the spread." #PKDay #womeninpeacekeeping pic.twitter.com/V0dK3VIKO0

“My duty was ending on 6 April, but I’m unable to go home due to COVID-19. My two-year-old is asking, ‘Mama, when will you be back?’ I’m worried, but my passion for work has increased manifolds. Together we can slow the spread,” Major Samia, a research and analysis expert, was quoted.

While Major Samia’s story has only surfaced now, this iron lady has far too many recognitions to her name. Last year in 2019, she was selected for UN Special Representative of the Secretary-General (SRSG) certificate, making her the first woman of Pakistan army to achieve the accolade.

Major Rehman is also among the 15 officers, deployed to the United Nations Organisation Stabilisation Mission in DR Congo (MONUSCO) who received a medal at a ceremony in Adikivu in South Kivu, one of the provinces in Congo. Samia has been deployed in the South African country since June 2019.