Notre-Dame de Paris; meaning "Our Lady of Paris", the cathedral which dates back to the 12th century, is considered to be one of the finest examples of French Gothic architecture. 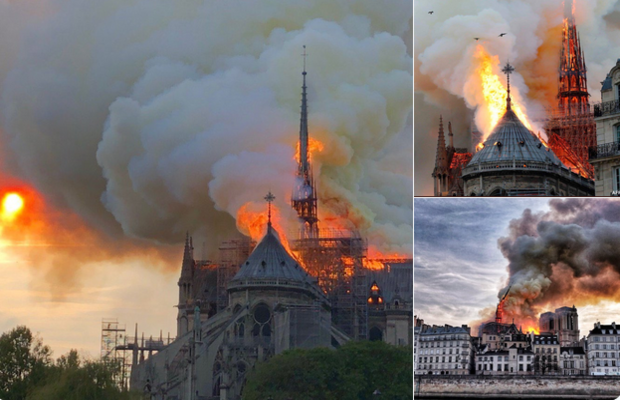 French capital’s iconic Notre Dame Cathedral has been caught in a massive blaze that engulfed the roof.

Thick plumes of smoke rise high into the blue sky as tourists and Parisians looked on from the streets below.

The roof of the famed cathedral collapsed, some while ago. The French capital’s mayor and firefighters warned people to stay away from the area.

The cause of the fatal fire was not known immediately. Still, there are no news updates about what had caused the fire. According to the local media, that police in the city are treating it as an accident.

#NotreDame: 'The roof has entirely collapsed, there are flames coming out the back of the cathedral as if it was a torch'@charli, Journalist at France 24, at the scene of the fire. pic.twitter.com/2B0IrMiDcL

The iconic 12th century Notre Dame Cathedral is famous for featuring in Victor Hugo’s classic novel “The Hunchback of Notre-Dame,” which attracts millions of tourists every year.

As being reported President Emmanuel Macron will be going to the scene of the fire. The French president has also mourned the landmark in a tweet. He also canceled his address to the nation that which was scheduled for Monday evening. 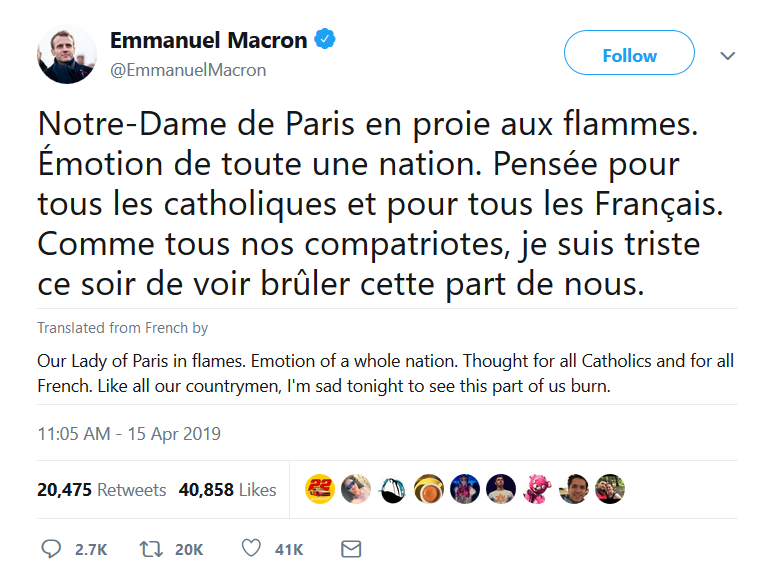 People are mourning the fire all the world, sharing messages on social media.

So horrible to watch the massive fire at Notre Dame Cathedral in Paris. Perhaps flying water tankers could be used to put it out. Must act quickly!

I studied History of Art at university….I studied gothic architecture and produced a thesis on #NotreDame after visiting the beautiful and incredible building many times.
So sad and tragic to see what’s happening to it right now and seeing it completely destroyed. pic.twitter.com/zhtxJMWWRi

Everyone is paying attention to the outside, but, are we realizing what we are losing, inside? #NotreDame pic.twitter.com/VTgvzTNNBH

My heart is breaking…
I visited Paris last year for my graduation trip. In the Cathedral I found myself walking across stone worn by thousands of feet before mine. Gazed at masterpiece of art, painstakingly made.
Now I’m praying that not all was lost. 😔#NotreDame pic.twitter.com/N39QE6WI1x

Here’s the moment the spire of the #NotreDame cathedral collapsed.

A massive fire is burning the iconic Catholic landmark in Paris.pic.twitter.com/4aleE20gQT