A clause by clause reading was done with each clause being approved by the house. 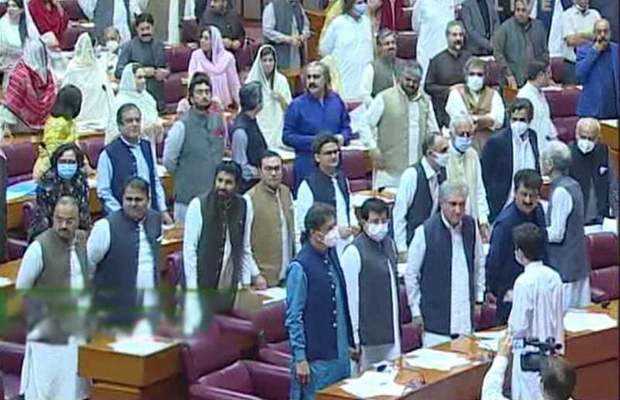 The bills presented in the parliament included the Anti-Money Laundering (Second Amendment) Bill, the Islamabad Capital Territory Waqf Properties Bill, and the Anti-Terrorism Act (amendment) Bill, 2020, all of which were previously rejected by the Senate.

Adviser to the Prime Minister on Parliamentary Affairs Dr. Babar Awan tabled the Islamabad Capital Territory (ICT) Waqf Properties Bill, which was passed with 200 members voting in favour and 190  against it.

PTI MNA Maleeka Bokhari tabled the amendments in several clauses of the Anti-Money Laundering (Second Amendment) Bill, all of which were passed.

The legislation aims at allowing law enforcement authorities to use certain encountering techniques with authoritative support of the courts of law to curb with menaces including money laundering and terrorism.

As per the details available with the news source, Section 19-C (application of investigation techniques) has been inserted in the Anti-Terrorism Act (ATA).

According to the ATA (Amendment) Bill, 2020, the investigating officer, with the permission of the court, can conduct covert operations to detect terrorism funding, track communications, and computer system by applying the latest technologies in 60 days.

The bill was rejected by the Senate earlier today, where the opposition enjoys a majority.

During today’s voting session, out of 104 members, 31 voted in favour of passing the bill on terror financing while 34 voted against it.

As per the 18th Amendment, if a bill passed by one house of Parliament is rejected by the other, it can become a law only if it is passed by a joint sitting of the two houses.

tweet
Share on FacebookShare on TwitterShare on PinterestShare on Reddit
Saman SiddiquiSeptember 16, 2020
the authorSaman Siddiqui
Saman Siddiqui, A freelance journalist with a Master’s Degree in Mass Communication and MS in Peace and Conflict Studies. Associated with the media industry since 2006. Experience in various capacities including Program Host, Researcher, News Producer, Documentary Making, Voice Over, Content Writing Copy Editing, and Blogging, and currently associated with OyeYeah since 2018, working as an Editor.
All posts bySaman Siddiqui