In response to US House Speaker Nancy Pelosi’s visit to Taiwan, China on Tuesday announced that it will launch a “series of targeted military operations.” 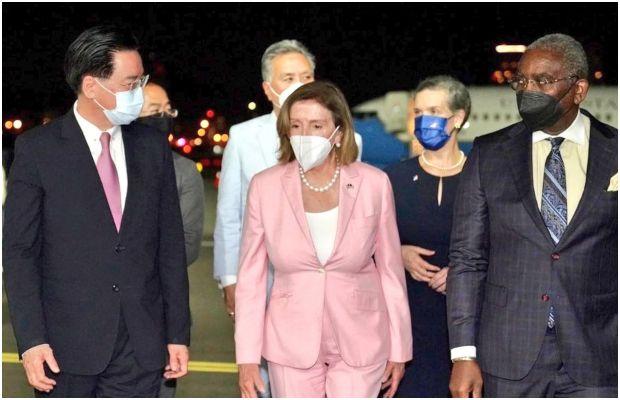 The 82-year-old lawmaker, Pelosi, second in line to the presidency, is the highest-profile elected US official to visit Taiwan in 25 years.

Welcome to #Taiwan, @SpeakerPelosi! Thank you & the congressional delegation for traveling all the way to show your support. JW pic.twitter.com/Al97hB68aa

In response to Pelosi’s visit to Taiwan, China on Tuesday announced that it will launch a “series of targeted military operations.”

The PLA Eastern Theater Command has announced that it will hold joint military operations around Taiwan, with joint naval and air drills in the north, southwest, southeast of the island, long-range artillery shooting in the Taiwan Strait, and conventional missile test firing in maritime areas east the of the island, starting from Tuesday night, Chinese daily Global Times reported.

Besides, the Chinese military will also carry out military exercises and training activities including four-day live-fire drills in six regions surrounding Taiwan, it said.

The last US House Speaker to visit Taiwan was Newt Gingrich in 1997.

She added her visit “in no way contradicts” US policy towards Taiwan and Beijing.

Our discussions with Taiwan leadership reaffirm our support for our partner & promote our shared interests, including advancing a free & open Indo-Pacific region.

International media has been glued to this high-profile US office holder’s visit to self-ruled, democratic Taiwan, which China considers its territory, and has vowed to one day seize the island, by force if necessary.

Some Twitter users are also following the development with keen interest.

Global order was broken when Russia invaded Ukraine. If the situation is not stabilized with Ukrainian victory, it will deteriorate further, including Taiwan.

Let's remember about the butterfly effect.

Today's trip to Taiwan by @SpeakerPelosi is a serious moment in American foreign affairs because it marks a high-ranking official making a very conscientious choice to back a democracy threatened by its larger autocratic neighbor and represents our best interests in the US too.

A side effect of Pelosi’s trip has been to showcase democratic republicanism at its best: The independence of Congress from the President; The presence of Taiwanese demonstrators of both sides greeting Pelosi’s motorcade. No violence, no arrests, no purges. Just democracy. https://t.co/SnzWyJxZE8

Wasn't even put off by Biden and the US military warning her not to. A stupid, vain, reckless decision, with potentially dire consequences for everyone alive, taken for the sake of a meaningless publicity stunt. God save us from the monstrous arrogance of Nancy Pelosi. https://t.co/EQYiTMGpA2

Good morning to everyone except Nancy Pelosi, who's willing to risk starting a war with China so that she can make massive profits on her husband's insider trading deals on computer chips.

Nancy Pelosi’s visit to Taiwan is expected to cost tax payers over $90 million for security, allocation of US military presence, and more.

All this for her to get a private tour of the Nvidia chip factory after she purchased millions in shares using insider info.

If Pelosi calls for Taiwan independence or the resumption of US-Taiwan diplomatic ties, that would be a cataclysmic mistake. But she won't. So, everyone should just chill, and stop making a mountain out of a molehill.

Nancy Pelosi’s Taiwan visit points to another corner of the earth where the USA wants more, endless conflict. An $838.8bn bipartisan defense bill sets the US commitment to a new Cold War with China. What a waste of social wealth for the masters of war.