According to a notice issued by PEMRA today, Imran during his long march speeches and a day ago had “made aspersions against the state institutions by levelling baseless allegations for orchestrating an assassination plan”.

PEMRA notified that airing such content was likely to create “hatred among the people” or was prejudicial to the maintenance of law and order or was likely to disturb public peace and tranquillity or endanger national security, further saying that it violated several laws and articles.

The regulatory body said the airing of such content is a serious violation of Article 19 of the Constitution and Section 27 of PEMRA Ordinance 2002 as well as the Electronic Media Code of Conduct 2015.

“In case of any violation, the observed license may be suspended … without any show-cause notice in the public interest along with other enabling provisions of law,” the notice added. 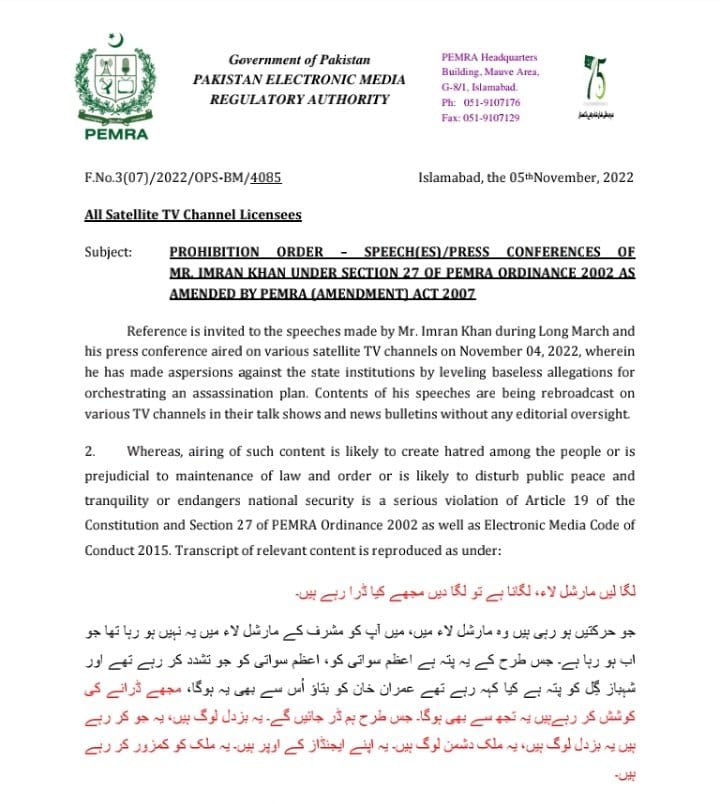 This is the second time just in two and half months of the period that PEMRA has barred TV channels from airing Imran Khan’s speeches.

Earlier in August, the electronic media regulatory authority imposed a ban on broadcasting live speeches of Imran Khan on all satellite TV channels with immediate effect.