The directive from the regulatory body comes a day after the Tv commercial went on air causing an uproar on social media.

Many took to social media demanding the media regulatory authority to look into the matter, criticising the advertisement content.

An official notification in this regard has been issued by PEMRA, directing all channels to get the visuals of the advertisements approved by the monitoring committee prior to their telecast.

In a statement, the regulatory authority said: “It has been observed with concerns that themes of advertisements of ordinary consumer products like biscuits, surf, etc being aired satellite TV channels are not corresponding with the disposition of these products. The trend is causing unrest and behavioral disturbance among the viewers being not only in violation of the commonly accepted standards of decency but also the socio-cultural norms of Pakistani society.”

“In this context, viewers are criticising PEMRA on Twitter for allowing…such indecent advertisements. Pertinently, viewers are of the view that airing advertisements regarding general consumer products like biscuits in such a bizarre manner where the visuals do not commensurate with the use of the products is unwarranted and needs to be looked into. In addition to this, complainants are of the opinion that the presentation of the products in such manner is wittingly or unwittingly merely aiming to promote consumerism,” it added.

“Therefore, all…are advised to sensitize their members to give consideration to the public concerns on the themes of the advertisement and specifically review the content of the advertisement of ‘Gala Biscuit’ by giving due credence to the apprehension of the views”, the statememt further added. 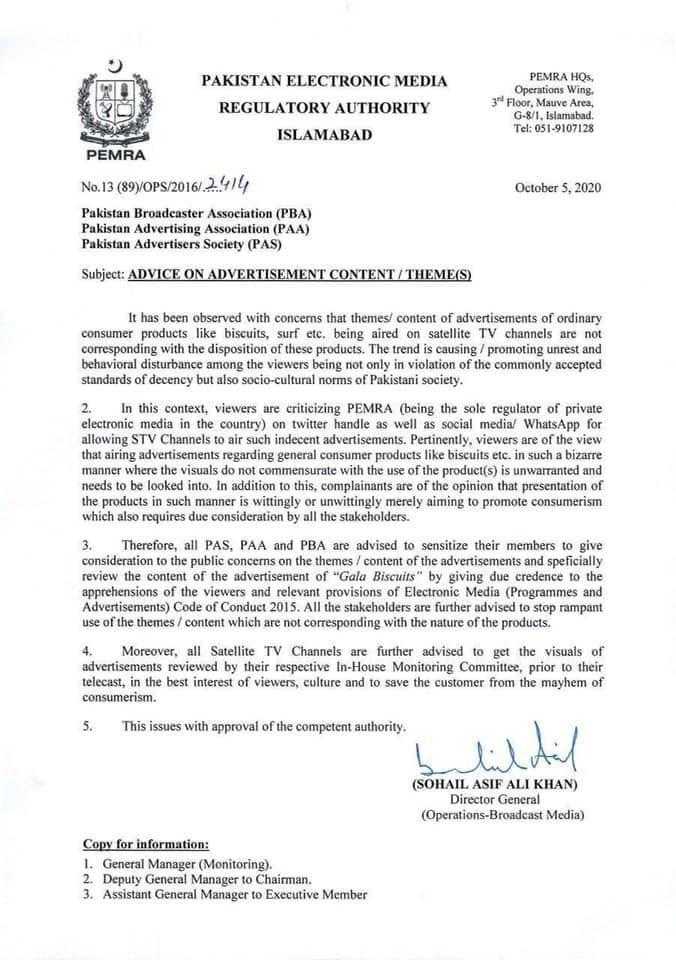 Here is how Twitter reacted towards the airing of Gala biscuit:

Here are some ingredients that are added in #galabiscuit making it a much delicious buscuit for us from now onwards. 😋 pic.twitter.com/YxykrzQ7eZ

Today, after a long time, I got a chance to watch TV. As soon as I looked at the screen, I saw a dancer. After a while, I looked around with a look of embarrassment & listened to the sound of the TV. It turned out to be a promotional song of #GalaBiscuit.
What is PEMRA doing?