The alleged thief was beaten brutally in the police custody and succumbed to his wounds. 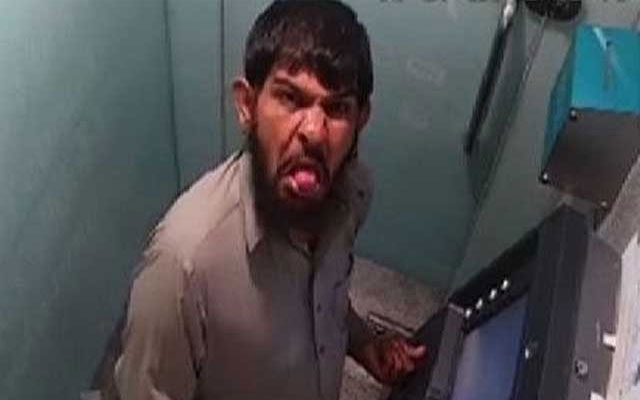 Punjab police is known for their brutal treatment of suspects in its custody.  It is no secret that Punjab police, while interrogation, mishandle suspects very often and the current example of their ill-treatment was the alleged ATM thief who died in police custody on Sunday.

ATM thief, whose video went viral on social media, dies in police custody a day after his arrest!

The suspect, Salahuddin who went viral as he was caught on camera for sticking his tongue out in ATM booth and later apprehended by Rahim Yar Khan’s police at Habib bank branch, was not prepared for what befell him. The alleged thief was beaten brutally in the police custody and succumbed to his wounds.

As the death news of the alleged thief surfaces, people on social media are showing their anger for what they call as “Gulluism” of Punjab police and call for an urgent reform on the provincial level.

“Punjab police has brutally killed a man who only broke an ATM machine. The Wasim Akram plus(Punjab government) and PM Imran Khan is still silent over the issue. This approach of Punjab police is not only condemnable but they deserve massive punishment. The government should investigate the matter on urgent basis and should not forget the issue just as they did with Sahiwal incident.

“Another case of Police Brutality, if you are a thief of ATM machine you get killed in police custody and if you are billionaire thief, you get deals, honour, security, expensive hospital treatments and VVIP protocols. Shame on Police!”

Another case of Police Btutality 😭
“If you are a thief of ATM machine you get killed in police custody and if you are billionaire thief, you get deals, honour, security, expensive hospital treatments and VVIP protocols”.
Shame on Police#PoliceBrutality#JusticeforSalahuddin pic.twitter.com/cdcd4Sysxq

Another user wrote, “The death of ATM thief under police custody is a horrific sneak peek into our elitist justice system where political elite such as Faryal Talpur is complaining about television and AC in jail, and the one who stole may be 1/10000th fraction of money ends up dead.”

Meanwhile, the police have registered case into the death of alleged ATM thief and a case has been lodged against SHO Mehmood ul Hassan, SI Shafqat Ali and ASI Matloob Hussain on the complaint of deceased’s father.

Salahuddin’s father while talking to media revealed that his son was mentally unstable and that he came to know about the incident on television.