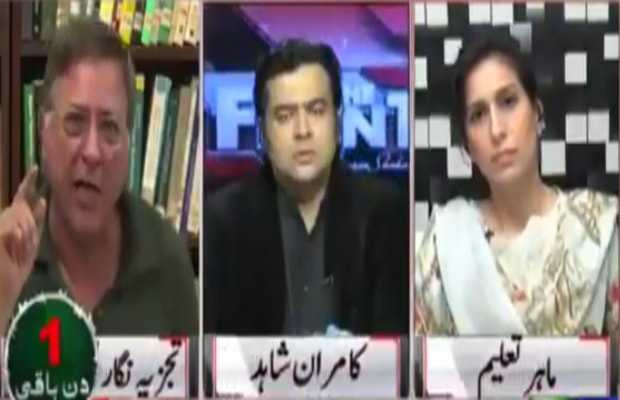 While making an appearance on Kamran Shahid’s current affairs show at Dunya TV, Pervez Hoodbhoy was supposed to present arguments in opposition to the uniform school curriculum, Single National Curriculum (SNC) that the Federal government of Pakistan intends to implement.

However, he lost his cool, and instead of presenting counter-arguments against the other guest analyst for education, Dr. Mariam Chugtai, he resorted to comparing her to radical extremists.

The clip showing the argument made by Hoodbhoy is doing rounds on social media.

Many of the netizens also took to social media objecting over former LUMS professor’s behaviour.

Dr Hoodbhoy has completely LOST it! Whats the difference between him and those religious extremists, whom he often criticises – Calling out Dr @MariamChughtai as ‘Fasaad’ goes onto show his actual bigoted mindset!

This is extremist behaviour by Dr Hoodbhoy. When people don't have any sound arguments, they start talking like this. @MariamChughtai has our support 👍👍 https://t.co/ef0qS4A2eO

The words used by Professor Hoodbhoy against @MariamChughtai are disappointing. Disagreement is a right but labeling a fellow academic "fasaadi" only adds to the poverty of our public discourse. We expect better from our seniors.

I mostly respect Dr Hoodbhoy’s views but this name calling is NOT OKAY.

Not Okay At All. https://t.co/SNz1wfruAM

Remember the outrage we showed when Khalil ur Rehman Qamar attacked Marvi Sirmed on tv?

This is why you won’t see outrage. Because the so-called left doesn’t call out their own as much as it should.