The pharmaceutical company has suspended Panadol tablets and children’s syrup production in Pakistan!

The GSK chief executive officer, in a letter written to Prime Minister Office Principal Secretary Syed Tauqir Shah on Friday, declared force majeure and asked the federal government to rationalize the prices of the paracetamol range against the backdrop of rising costs of raw materials spurred by inflation.

“We urge the Federal Government to take urgent action to rationalize the prices of the impacted Panadol range commensurate with the increase in the price of the impacted raw material and as recommended by the Drug Pricing Committee of the Drug Regulatory Authority of Pakistan, so as to enable the company to continue supporting the government to ensure an ongoing supply to all patients and consumers in need,” the letter read.

Force majeure is a condition in a contract that frees all parties from liability in case of an extraordinary event such as a pandemic or catastrophe. 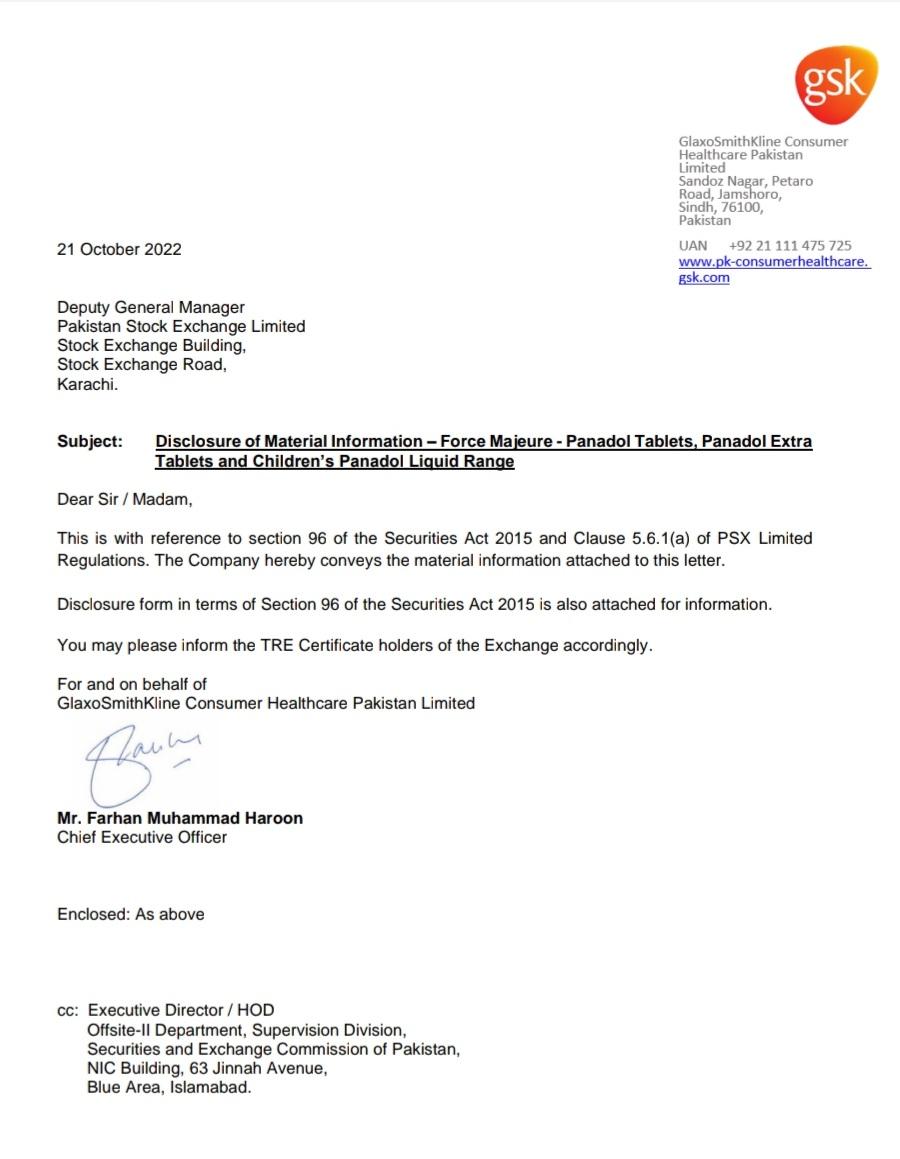 GKSCH in the notification has appealed “to the federal government to accord approvals for the adjustments to the selling price(s) of the captioned Panadol range of products, all of which are Paracetamol based.”

GSKCH  said that it had obtained approval in the 50th Drug Pricing Committee (DPC) of the Drug Regulatory Authority of Pakistan (DRAP), held on 12 January 2022 which was recommended by the DPC for the approval of the Cabinet.

“But, according to media reports, the same has been rejected after a prolonged delay by the latter without any intimation of reason(s) given to the company.

“Also, although the company has received a routine Consumer Price Inflation (CPI) adjustment for the year 2022 from DRAP on 25 August 2022, the same is not commensurate with the debilitating increase in the prices of the raw material of Paracetamol,” it added.

The company stated that it played a “responsible role during the COVID-19 pandemic, dengue fever crisis, and floods across Pakistan, by ensuring continuous supplies of the Panadol range; this despite incurring heavy financial losses on the production of the said Panadol range due to an increase in the price of Paracetamol raw ingredients and in the absence of due approval by the federal government of the recommendation of the DPC / DRAP.

“However, due to the challenges stated above, manufacturing of the Panadol range on negative margins is unsustainable, and despite exhaustive efforts of the company to mitigate this matter through dialogue, the situation is now beyond our control.

“We are thus forced to declare force majeure regarding the production of Panadol Tablets, Panadol Extra Tablets, and Children’s Panadol Liquid Range,” it said.

GSKCH stated that it produced nearly 5,400 million tablets of Panadol 500mg and Panadol Extra in the last twelve months, to serve its customers, consumers, and patients in need.