As many as 97 people had lost their lives in the Pakistan International Airlines (PIA) plane crash tragedy on Friday. 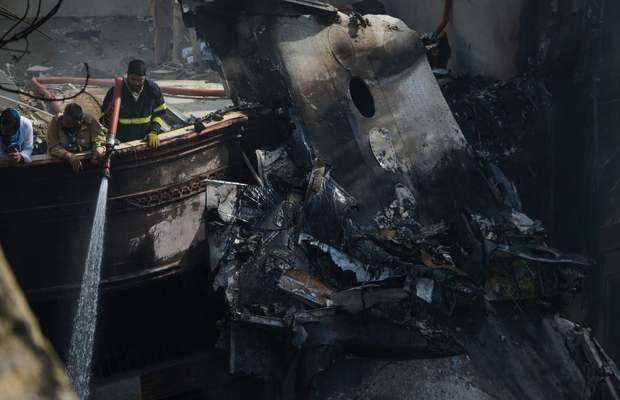 All bodies of the victims had been retrieved from the incident site by 12 p.m. on the same day of the plane crash - OyeYeah News
0Share
159Views

As many as 97 people had lost their lives in the Pakistan International Airlines (PIA) plane crash tragedy on Friday, May 22.

“Identified bodies have been handed over to heirs. Whereas, medical records and samples from heirs are being collected for remaining DNA tests to complete the identification process at the earliest,” Minister said in a statement.

The statement added that all bodies of the victims had been retrieved from the incident site by 12 p.m. on the same day of the plane crash in collaboration with PIA scouts, volunteers; rescue teams of Army, Air Force, Police, and Rangers, besides cooperation of local residents.

“The target of bodies’ retrieval had been achieved early by the rescue teams, who worked with dedication. The departments concerned were given the task to find the bodies within 24 hours.”

Sharing the details of the rescue and relief efforts, Sarwar added that the black-box of the ill-fated plane had been recovered within 24 hours of the incident and handed over to the investigating team, while the search for the cockpit voice recorder was still underway.

“It will also be handed over to the investigating team upon recovery.”

Furthermore, he said that PIA was transporting dead bodies of the victims to their homes and its officers were handing over Rs one million each to heirs at their doorstep on account burial expenses.

The minister said heirs of the victims and residents of the area, who became homeless after being damaged their houses, had been provided accommodation at the PIA Airport Hotel and Qasr-e-Naz.

“Around 36 heirs and four families of the victims are residing in the PIA hotel, while seven families are staying at the Qasr-e-Naz.”

The airliner also brought heirs of the victims to Karachi from abroad and within the country by providing them tickets so that they could visit the incident site and attend funerals of their loved ones, federal Minister added.

He also told that the PIA CEO Air Marshal Arsham Malik was himself inquiring after health of the injured, adding on special directives of the prime minister an amount of Rs 500,000 each had been announced as compensation for three females who received injuries on ground after the plane crash, besides bearing their treatment expenses.

A survey had been started to assess the damages that occurred to houses and property, following which the government would announce a compensation package, according to the minister.

He said PIA Emergency Response Centre was fully operational and busy to assist the affected families and would continue with the same spirit till handing over of the last body to heirs.

Talking about the accident probe he added that no one from PIA, Civil Aviation, and any other stakeholder would be included in the investigation team for an impartial and transparent investigation.

He has requested the public to avoid giving attention to the so-called experts misleading them due to their limited information about the incident.

“A team of qualified experts in carrying out their professional work in that regard,” he added.

“It is a matter of sensitive nature, causes of which can only be determined after a thorough investigation by all aspects,” the minister said.