The ill-fated PIA flight PK- 8303 flew from Lahore to Karachi on May 22 at 1:05 pm but crashed on residential Model Colony's area 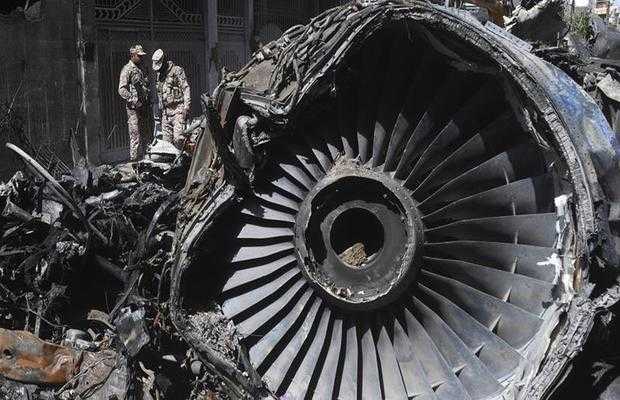 The plane collided in the middle of the 9,000-meter runway, damaging both engines - OyeYeah News
0Share
184Views

The interim investigation report of the PIA plane crash has been submitted to Prime Minister Imran Khan.

The Craft Accident and Investigation Team blamed Capt. Crew and Air Traffic Control for the crash.

The report said that the accident was not due to technical fault but due to human error.

The report says that the cockpit crew, civil aviation, and control tower made mistakes before and after the accident. The speed and altitude of the aircraft were high.

On the first landing, the plane collided in the middle of the 9,000-meter runway, damaging both engines.

According to the report submitted to the Prime Minister, the height of the plane was more than the prescribed height even when it came to the landing position but the control tower landed the ship.

According to the report, the decision to take the plane into the air again after landing was wrong. After take-off again, the plane was flown for 17 minutes, during which the engines failed.

The report further added that parts of the plane remained on the runway for 12 hours after the first failed landing, but were not assembled by the air site unit, after which two flights landed on the runway. The plane was perfect for flight and there was no fault in the landing gear.

The ill-fated PIA flight PK- 8303 flew from Lahore to Karachi on May 22 at 1:05 pm but crashed on the residential Model Colony’s area near the Karachi airport during landing.

Ninety-nine people, including 22 passengers and crew, were killed in the crash, while two survived.

tweet
Share on FacebookShare on TwitterShare on PinterestShare on Reddit
Saman SiddiquiJune 22, 2020
the authorSaman Siddiqui
Saman Siddiqui, A freelance journalist with a Master’s Degree in Mass Communication and MS in Peace and Conflict Studies. Associated with the media industry since 2006. Experience in various capacities including Program Host, Researcher, News Producer, Documentary Making, Voice Over, Content Writing Copy Editing, and Blogging, and currently associated with OyeYeah since 2018, working as an Editor.
All posts bySaman Siddiqui